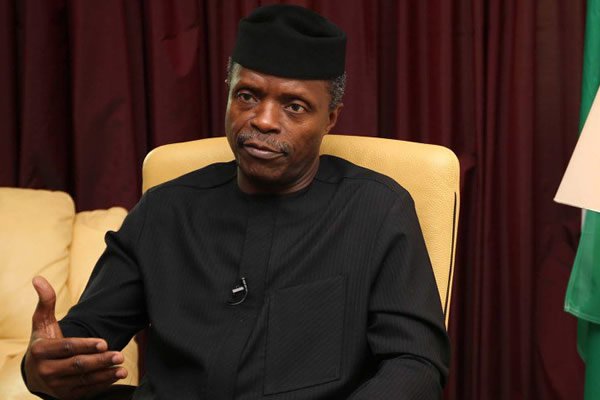 He spoke at a meeting with a delegation of Niger Delta Expatriate Mentorship Committee, an initiative led by the Minister of Niger Delta, Mr. Uguru Usani Uguru, in his office.

Osinbajo restated that the Federal Government was keen in its desire to support the establishment of a chamber of commerce for young people in the Niger Delta region to drive creativity and entrepreneurship.

The Vice President hailed the initiative and noted that the expatriate mentorship scheme, which is in partnership with UNESCO, aligns with the commitment of the Buhari Presidency for the region and was capable of catalysing development in the region.

He observed that the international mentorship/internship would expose beneficiaries to international standard, best business practice and technology.

The leader of the organisation and Chief Mentorship Officer, Mr. Chika Olejeme, said under the National Expatriate Mentorship Strategy, selected youths would be sent abroad for international mentorship and internship.

Thirty countries in Europe and the United States of America have already signed up to the programme.

Speaking at another meeting with a delegation of the Nigerian Association of Law Teachers at the the State House, Abuja, Osinbajo said the President Muhammadu Buhari administration was committed to sustaining the anti-corruption fight.

He also said the government would ensure that the system was cleaned up and government business was done the right way.

In a statement by the Senior Special Assistant on Media and Publicity, Laolu Akande, Osinbajo said: â€œIf we are not able to sustain the trouble against corruption, we will end up in a very, very bad way as a nation.â€

The Vice President noted that the Defence contract of $15 billion, which was frittered away by a few people, was half of the countryâ€™s foreign reserves.

Stressing that the fight against corruption is a difficult fight, he said: â€œWe have seen it in so many different ways that at almost every state, corruption fights back and fights very fiercely.â€

â€œWe should be able to examine our priorities because for us corruption is not a moral issue, it is an existential issue. To a large extent it will determine whether we will survive as a corporate whole because of the way people feel that when I get into an office I will go after the resources of the state, and I will go after it in the most vicious and the most reckless manner that is possible.â€

In response to the malaise of corruption, he said the intellectual elites, whether religious, political or academic, must stand up for what is right.

The leader of the association, Prof. Godwin Nwabueze Okeke, hailed the Vice President for being available for the visit and urged him to declare open the forthcoming 50th Conference of the Association at the Nnamdi Azikiwe University, Awka in June, 2017.

He said the association was solidly in support of the Federal Government and was ready to assist in whichever way needed.