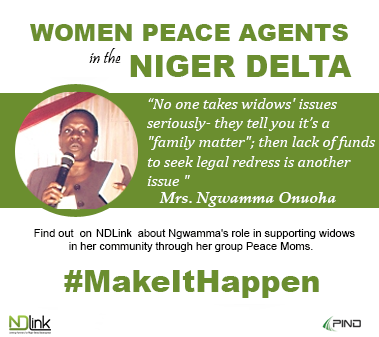 Violence against Women: Giving Voice to the Voicelesss

Context: A young woman recently lost her husband and was denied access to his property because she refused to be inherited by her brother-in-law. Wife inheritance is practiced in many cultures in Nigeria and in many instances, the woman has no voice to say â€˜noâ€™. Many women subject themselves to this practice for fear of being dis-inherited or thrown out. In this particular case, the woman was rendered homeless and her children were thrown out of school. The effect of this emotional/psychological abuse on the widow and her children was devastating. The gender studies commissioned by PIND show clearly that patrilineal inheritance is practiced in most parts of the Niger Delta. When combined with harmful widowhood practices including wife inheritance, the effect can be devastation.

Â The International Womenâ€™s Day #MakeItHappen is a series that highlight key women, who through their actions and work, have created a peaceful environment that has led to more economic opportunities for women and men in their local communities.