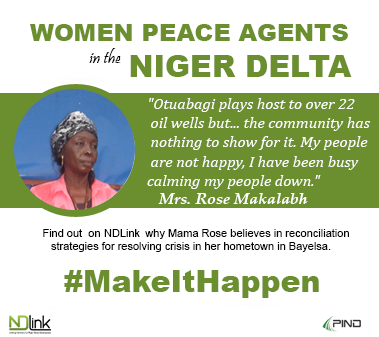 Barrister Mrs Biobara Makalabh Roselyn aka Mama Rose or Madam Borikiri is a 55 year old retired Police. While in service, she rose to the rank of Divisional Police Officer (DPO). She was the DPO of Borikiri Police Station in Bayelsa State. In addition,Mama Rose is a singer, a dancer and an artist. According to her, I propagate my message of peace through my artwork. I believe in Peace. When I was in service, I was always ready to go all out to encourage people to pursue peace. I actually reconciled many people. Mama Rose is reputed to have launched an Album titled the Niger Delta Root. One of the lead tracks in the Album is Police Women. The track is said to be widely celebrated amongst Police Women and it literally became the anthem of the Police Women Training program in West Africa. She also founded The Makalabh, a development Foundation.

Context: The United Nations recognizes that in all fields of peacekeeping, women peacekeepers have proven that they can perform the same roles, to the same standards and under the same difficult conditions, as their male counterparts. According to the UN, It is therefore an operational imperative that we recruit and retain female peacekeepers. Women are deployed in all areas  police, military and civilian and have made positive impact on peacekeeping environments, both in supporting the role of women in building peace and protecting women’s rights. Mama Rose achievements as a police officer reiterate this fact.

What did the Peace Agent do/achieve?

The 2011 election would have torn my community into pieces. The generality favoured a candidate, while the Government and political elite favoured another. So everybody was ready for a show down Youths guarded the community to see how anybody would hijack the polls, while women threatened to go naked. When I saw the political tension, I had to call everybody to a round table. They all agreed to a give and take, the candidate favoured by the Youth and Women agreed to step down. The election went peacefully, every party was later absorbed in the political leadership and Community is the better for it.

including my officers. I was wearing shorts, I ran after the boy, he jumped into the river, I also jumped into the river. It was home video, people were watchinghe is Ijaw, I am Ijaw, he can’t swim more than me. I went after him in the river. After sometime one man said how can we allow this women to suffer like this? He brought a boat to me but I said no. If you want me to come out, go and catch that boy first. He then went after the boy, caught him, it was then I agreed to enter the boat. I arrested the boy and got the money back to owner. In my usual style, I locked the boy up for sometime. I wanted his head to cool down. When I saw that he was totally broken and remorseful, I brought him, called the man he cut and stole from. He apologized and vowed never to go back to that life. He became a totally changed man.