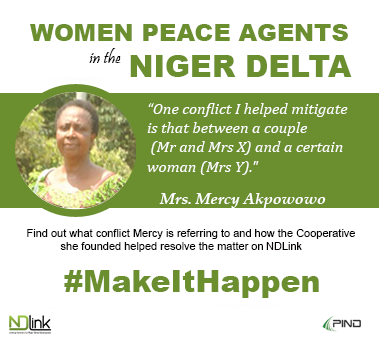 Context:
Evbuwa is a farming community in Edo State. The women of Evbuwa are reputed for their hard work. Many of them cultivate cassava, among other crops. In the past, they used to market their produce direct from the farm individually. Conflict often arose over non-payment by debtors leaving many women stranded.

What did the Peace Agent do?
i. Mrs Mercy Akpowowo organized the women into a group called the Progressive Women Cassava Farmers Cooperative Society. Cooperatives are useful because they operate as self-help groups, which motivate members to look towards themselves as a group for solution. Cooperatives achieve far more than each individual can achieve.
ii. Mrs Akpowowo has intervened in several conflicts involving members of the cooperative or their family members. â€œOne conflict I helped mitigate is that between a couple (Mr and Mrs X) and a certain woman (Mrs Y). Mr and Mrs X sold 3 acres of cassava farm to Mrs Y for a given amount. Mrs Y defaulted in the agreement terms and this led to serious fighting between the two families. The matter was reported to me by Mrs X (a member of my Cooperative) and I immediately invited some opinion leaders and influential people in the community including the Community Head (Odionwere) to intervene.â€ According to Mrs Akpowowo, Mrs Y refused to complete payment because the quality of produce from the farm was below her expectation.
Results/Achievements:
i. The Cooperative has attracted 2 grants so far â€“ the World Bank Fadama III facility and another from the TY Danjuma Foundation.
ii. The Cooperative has helped to prevent exploitation. Members now jointly own a Garri processing mill. â€œWe now process our cassava and fry it to Garri then send to the cities for sale unlike before that we just sell our cassava farm away without making profit.â€
iii. The conflict between Mr and Mrs X and Mrs Y was resolved (though Mr X died from natural causes during the feud).

Peace Agents demands:
i. Community Leaders: The Community leaders should no longer relegate women to the background in their decisions that affect their livelihood.
ii. LGA Chairpersons: Provide adult education facilities to the rural women.
iii. State and Federal Governments: Empower the rural women economically through grants and micro-credit.
iv. Others: Train rural women (farmers) in better farming procedures.

Â The International Womenâ€™s Day #MakeItHappen is a series that highlight key women, who through their actions and work, have created a peaceful environment that has led to more economic opportunities for women and men in their local communities.