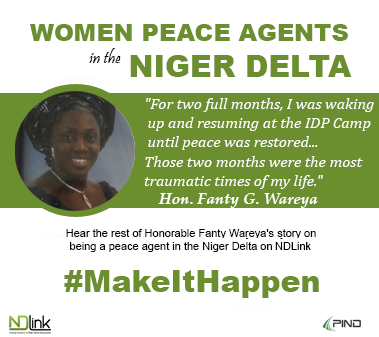 Biodata:
Hon Fanty Goodness Wareya is a 49 year old woman and the immediate past chairperson of the Gbaramatu C.D.C. She grew up in Warri. According to her, we did not talk of tribe back then. We only knew ourselves as Warri people or Waferians.

Context:
Nigeria currently harbors the highest number of internally displaced persons (IDPs) in Africa. In the Niger Delta, there has been deep mistrust and disagreements over the allocation, disbursement and use of income generated from its oil wealth. As noted by the Director, Internal Displacement Monitoring Center (IDMC) in Geneva, violence, abuses, and forced evictions all add to the conflict-mix. Many people lose their lives, families and communities become dislocated; many lose their livelihoods. Certain communities in the Niger Delta have experienced crisis in which whole communities were razed down. In May 2009, Hon Fanty’s community of Gbaramatu, Warri South-West Local Government Area of Delta State witnessed deep crisis there was a clash between militants and the officers of the Joint Task Force (JTF).

What did the Peace Agent do?
Hon Fanty Goodness Wareya has been closely involved in providing relief materials for IDPs.
According to her,

“During the Gbaramatu crisis, I was already the CDC chairperson of the clan. It was heavy on me again. I had to relocate and support my extended family. I had over 30 persons in my house in Warri who managed to find their way through Sapele River and other routes. I had to take care of them. Then came the duties at the IDP camp. I had to be at the camp everyday. I drove from Okumagba to Ogbe Ijoh daily to make sure that the women and children were catered for. Thank God for the NGOs that came to work with the women. For two full months, I was waking up and resuming at the IDP Camp until peace was restored. At this time we still had to make sure relief materials were sent to those who hid in the bushes and were now back in the burnt down communities. We got word that people were dying of hunger and the government set up a committee. I was in one of the committees. We had to go back and forth again with relief materials and lots of food items. Those two months were the most traumatic time of my life.

Results:
i. Her work attracted support by other women and they were able to build a united front. My group and I got recognition. We were even taken to Brazil for training on peace and conflict resolution.

Challenges:
i. The main challenge was that of being disregarded – because you are a woman, some don’t take you seriously or they will say go home and take of your children and husband, leave these matters for us.
ii. Then financially we did not have the wherewithal to respond promptly to issues as they arose. We had to wait for financial support all the time. It was very painful. Sometimes we felt like beggars.