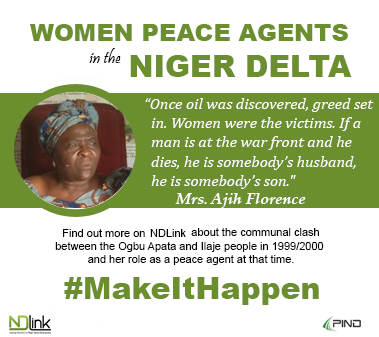 Mrs. Ajih Florence is a 65-year old grandmother from Arogbo-Ijaw community, Esa – Odo Local LGA of Ondo State. She is the Executive Director of Women Advancement and Development Initiative (WADI). She was the first female State Coordinator of CISHAN (Civil Society Organizations on HIV/AIDs in Nigeria), 2008-2012 and currently the Deputy State Coordinator of Partners for Peace. According to her, when my husband was the chairman of our L.G.A, we had some visitors from the World Health Organization. One of the visitors noticed my passion for women’s empowerment and encouraged me to start an NGO. Thus in 1999, WADI was born.

The context: During her husband’s tenure as LGA Chair, a communal clash arose in 1999/2000 between the Ogbu Apata and Ilaje people. It was a dispute over an oil-rich piece of land. Men and boys had to fight to defend their communities. According to Mrs Ajih, these men and boys were our children, our brothers, our husbands. The conflict resulted in displacement. Many families relocated to Delta, Bayelsa and Rivers States etc. Some people died in the process. Mrs Ajih narrated the story as follows -:

I think there was a particular case where a woman gave birth in the bush while running away. Though she survived, the baby died. They went through hell. Some left naked… If you didn’t have a canoe, you had to swim. So some swam very long distances before they were rescued€. In any conflict, there are actors, there are victims. Every crisis wears a human face. In that crisis, the actors were the men. In any crisis, a woman would never be a problem person but when the problem comes, the woman would be the one bearing the burden of that problem. The two warring communities lived together for years. Once oil was discovered, greed set in. Women were the victims. If a man is at the war front and he dies, he is somebody’s husband, he is somebody’s son.