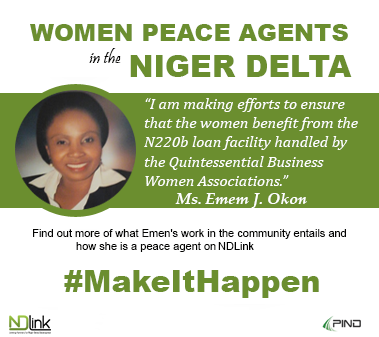 Ms Emem J. Okon is a 47 year old activist from Ikot Otu village in Ikot Ekpene Local Government Area of Cross River State. She is the Founder and Executive Director of Kebetkache Women Development & Resource Centre, a women’s rights focused organization headquartered in Port Harcourt, Rivers State. She is a community mobilizer, development practitioner, women rights activist and ardent advocate for gender equality and the advancement of women. According to her, I have been in the women’s rights movement since 1997, when I started as a member of Women in Nigeria (WIN), Rivers State branch. I became the state secretary and later the State Coordinator of WIN Rivers State. I have occupied leadership positions in various networks and coalitions including Zonal Coordinator, Gender and Constitution Reform Network (GECORN); Member, Board of Trustees & Oversight Group, African Women United Against Destructive Resource Extraction (WoMIN); South-South Zonal Coordinator, West African Network for Peace-Building (WANEP). Ms Okon was the Pioneer Secretary, Conflict Mitigation and Management Regional Council (CMMRC) Rivers State branch. She is a deaconess and a Director, Foreign Affairs in Royal House of Grace International Church.

Context: Emem works in local communities that have been devastated by conflict and where competition for resources often results in violence. These communities have huge oil reserves but many of their residents are poor. One of such communities is Rumuekpe which experienced violent conflict for over 5 years as a result of leadership tussle, misuse of community funds and privileges from oil resources. Many people lost their lives; many women were raped; some became widowed. The key parties involved in the conflict were Youth Leaders, Men, Security, Chiefs and Local Government Officials.

What did the Peace Agent do/Achieve?

Other testimonies by Emem:

High poverty rate among the women whose means of livelihood were destroyed during the years the conflict is an issues. I am making efforts to ensure that the women benefit from the N220b loan facility handled by the Quintessential Business Women Associations.