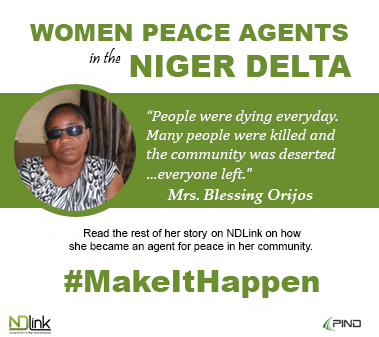 Violent Conflict in Rumuekpe: Women to the Rescue

Context: Rumuekpe, an oil producing community in Rivers State plays host to several international oil companies – Agip, SHELL, TOTAL ELF and the Niger Delta Petroleum Resources (NDPR). In 2005, a violent conflict arose as a result of an internal leadership tussle and disagreement over disbursement of funds provided by the oil companies. This led to a split in the leadership and two factions emerged. The conflict deepened over time and key players began to kill one another. According to Mrs Orijos, People were dying everyday. Many people were killed and the community was deserted everyone left. They even came to Port Harcourt and killed some people in their houses. My brother was also killed.

Community members, especially women remain impoverished in Rumuekpe. Mrs Orijos calls for support (economic empowerment) for the women of Rumuekpe and for capacity building of her women’s group (now a community-based organization) for sustained action.