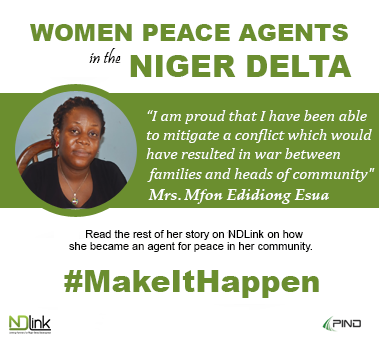 Mrs. Mfon Edidiong Esua, the Executive Director of Dynamic Youth Development Organization, Uyo is 35 years old and a native of Akai Atti Udesi community in Mbo L.G.A of Akwa Ibom State. She holds an HND in Business Administration/ Management and has taken courses in Monitoring and Evaluation; Data Quality Management and Conflict Mitigation and Management among others. She has been a Social Worker for 7 years and has been involved in several peace building efforts. One of her success stories is related below.

Context: Ikot Ambon is a poor, rural farming community in Ibesikpo Asutan LGA. As part of its corporate social responsibility, a certain construction company offered to provide income generation opportunities for members of the community. Disagreements arose over selection of beneficiaries. The youth alleged that the community leaders displayed nepotism/favouritism in selecting these beneficiaries and in the process excluded the most vulnerable. Thus, the youth were pitched against the community leaders.

The Dynamic Youth Development Organization had, at the time of the brewing conflict, concluded plans to carry out community entry events in Ikot Ambon including an initial sensitization event. This was marred by protests by the youth. Mrs Esua then led the team to hold consultations and make enquiries to unravel the cause of the brewing conflict. According to Mrs Esua, the men wanted to allocate slots to who they knew especially family members who were not qualified for the slots, and to those who offered them bribe and to the children of their peers and party members. The youths disagreed vehemently to such ideas and kept on saying the slots were for less privileged and the vulnerable. This led to a misunderstanding between the community leaders and youth who protested in the community and at the local government council.

In addition to the fact that the youth were aggrieved, some of the early warning signs of imminent conflict were palpable: unemployment rate and poverty levels were high, there were allegations of corruption among leaders and discrimination against the poor and most vulnerable. Conflict was imminent.