The Africa Network for Environment and Economic Justice (ANEEJ), Members of Civil Society Organisation (CSOs), Community members and Journalists drawn from four state of Edo, Rivers, Cross Rivers and Ondo state met in Benin City for a 2-day workshop with the theme: â€œImproving Civil Society Capacity to Engage Niger Delta Development Agenciesâ€. The workshop was organised following the Strengthening Advocacy and Civic Engagement Project that Chemonics International is currently anchoring with support from USAID and PIND.

ANEEJ is a non-governmental organisation that promotes sustainable development in the Niger Delta Region and Nigeria at large. ANEEJ has carried out extensive work on looted assets recovery and participated actively in the preparatory process of UNCAC in Vienna, Austria and has ECOSOC status with the United Nations.

For over 15 years, ANEEJ has been working in Benin City, Edo State, and the Niger Delta region and has managed activities across the six-geo-political zones of Nigeria. Working with local communities, civil society organization, media practitioners, the private sector, States and national government and the focus has been on sustainable development, the alleviation of poverty and economic empowerment.

Going through the draft agenda/course content for the 2-day workshop on improving civil society capacity to engage Niger Delta Development Agencies (NDDA), there was enough evidence to show that the workshop was well programmed to capture a whole lot of activities centered around enhancement of knowledge of participants on mandates and activities of the Niger Delta Development Agencies and how such knowledge can translate to increased demand for accountability. The intention is to evolve development agencies in the region that are responsive to the yearnings of the people of the beleaguered Niger Delta.

OBJECTIVE of the workshop were to share a summary report of the outcome of citizensâ€™ report card on Niger Delta Development Agencies jointly undertaken by ANEEJ and LITE-Africa, enhance the knowledge of participants on issues relating to budget monitoring and tracking as well as advocacy and engagement strategies, agree on follow up actions to undertake so as to increase citizensâ€™ demand for accountability with the agencies.
The workshop content for each day was well programmed, interesting and creating room for interaction, discussions and contribution from participants to make the workshop an interactive one where resource persons did not have to do the talking alone but also participants responding as well to issues arising from various presentations. In between the paper presentations, the organisers of the workshop created time for participants to have delicious meals to keep them good, healthy and focused while the workshop lasted.

The workshop created room for interesting presentations that will increase the knowledge of participants especially the CSOs, community members and members of the press on how to hold the NDDA accountable in the delivery of their mandates.

The papers for day one featured Summary of citizensâ€™ report card on Niger Delta Institutions (NDIs); overview of the Niger Delta Developmental Agencies and their mandates; budget processes, monitoring and tracking; issue based advocacy and engagement strategies/tools with government institution/Niger Delta Developmental Agencies. Other areas covered include how CSOs and communities can identify issues in their environment, organise themselves to engage Niger Delta Development Agencies. There was also opportunity to get feedback from community representatives regarding advocacy priorities, CSOs and media also converged to identify concrete issues for advocacy with NDIs and how to engage such institutions. There were also discussions around access to budget information, fiscal data and level of citizensâ€™ participation in the budget processes of development agencies set up to develop the Niger Delta.
The event also received the blessing of the Edo State Government as the Special Adviser to the Governor on Oil and Gas Princess (Mrs) Ikuoyemwen Erediauwa Aimiuwu was on ground to declare the workshop open where she called on the civil society groups to improve their capacity and positively engage Niger Delta Development Agencies to make them more accountable and transparent in the delivery of their mandates.
She hailed ANEEJâ€™s motive and idea behind the strengthen advocacy and civic engagement (SACE) project where Civil Society Organizations enhance their capacity to engage development agencies like Niger Delta Development Commission (NDDC), Ministry of Niger Delta Affairs (MNDA), Edo State Oil and Gas Producing Areas Development Commission (EDSOGPADC) and Delta State Oil Producing Areas Development Commission (DESOPADEC) in order to promote inclusive development in the region. She alluded to the fact that such a process could contribute to strengthening good governance by increasing the capacity of Civil Society organizations to influence the development and implementation of key democratic reforms at Local, State and National levels. â€œANEEJ believes that the Civil Society organizations, host communities and citizens of this country need to hold these agencies accountable in the delivery of their mandate. As a representative of the Edo State Government, she understood the importance of such a demand for not only accountability but transparency mechanisms which have been provided in the enabling laws that set up these agenciesâ€.

â€œIt was expected that at the end of this workshop all participants would have improved their knowledge about the mandate of these Niger Delta Development Agencies here present. And a solid platform should be created for better engagement and collaboration between the Civil Society organizationâ€™s and these Agencies and furthermore create greater public awareness on the activities of all these agenciesâ€.
While presenting a summary report of the â€œCitizens Report Card on Niger Delta Institution (CRC)â€ survey, Innocent Edemhanria said the CRC as an advocacy tool provides a basis for interaction among citizens and the institutions which is hoped to result in enhanced administrative planning and coordination to ensure appropriate and functional development project. Government agencies can also utilize this community-level data to guide their development policies, decisions, and allocation of funding to Niger Delta communities. 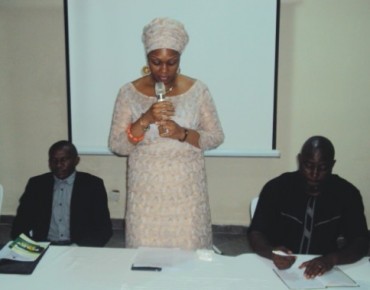 He said the CRC is an assessment that was carried out in 24 communities across four States in Niger Delta-Cross River, Delta, Edo and Ondo.â€The assessment was a follow up to validate the earlier research carried out on the NDIs by both organisations focusing on having a deeper understanding of their mandate, policies and activities. The CRC serves as an accountability tool, which provides community residents feedback on the effectiveness, mandate, policies and activities of the NDIs. Thus, it amplifies the voice of community residents to a wider audience, which will help place them at the centre of the policy discourse on decisions that affect their livesâ€.
Furthermore Mr Edemhanria said the CRC report shows that development interventions in the Niger Delta need to be re-focused to meet the need of community residents. It reveals poor planning, in some cases failure to properly incorporate community residents in the development decision processes and lack of coordination among the NDIs leading to duplication, abandoned and sub-standard projects in some communities.
â€œNiger Delta residents have also struggled to fully understand the mandate of Niger Delta Institutions which include Niger Delta Development Commission (NDDC), Ministry of Niger Delta Affairs (MNDA), Edo State Oil and Gas Development Commission (EDSOGPADEC) and Delta State Oil Producing Areas Development Commission (DESOPADEC) and how to single out what each of these institutions stand to deliver in term of development in the regionâ€.

Presenting a paper entitled â€œIssue Based Advocacy and Engagement for Civil Society Organisations and Community Actors/Stakeholders in the Niger Delta Regionâ€ Mr. Kentebe Ebieredor of Environmental Rights Action (ERA) said the objective of the paper is to build the capacity of CSOs to effectively engage with government institutions and to hold such accountable; to enable participants gain useful information about the advocacy process in practice; to enable participants gain a clearer understanding of their roles as advocates and to enable participants improve their ability to assess their contributions and measure advocacy success.
He said advocacy is putting a problem on the agenda, proving a solution to that problem and building support for acting on both the problem and solution. â€œAdvocacy involves different strategies aimed at influencing decision-making at the local, state and national level, specially: who decides-appointments, ministers, boards of advisors, judges, managing directors etc. Advocacy especially in the context of CSOâ€™s is when they seek to affect some aspect of society and bring about positive change; whether it relates to behaviour change, rules, government laws and policies.

â€œAdvocacy is a good and existing work and seeing yourself as someone committed to entrenching social justice and equity can be very rewarding. It is therefore important to get focused on the issue(s) you are planning to advocate, research and understand the facts and details, identify your potential allies and opponent, outline and study the potential risk factors as well as costs, and get focused on the ultimate goal-changing government policies for the good of allâ€.
Presenting a paper on â€œBudget monitoring and Trackingâ€ the Executive Director of Mazik Resources International Nigeria Limited Zik Igbadi said it is important for us all as citizens of Nigeria to be interested on budgetary issue, engaging ourselves on the formation and implementation of the budget. He said the budget as an instrument of government belong to us all and, as citizens, we should monitor how these resources are used to improve our lives.
He said the budget is an important instrument and a planning tool to set goals, estimate cost and expected outcomes. He said it is also a controlled tool to hold agencies accountable for planned revenue and expenditures; it is also a political tool to help with prioritization and target allocations.