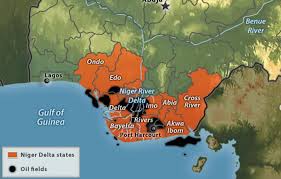 President Mohammadu Buhari yesterday in Abuja pledged that the Federal Government would revisit the constitutional 13 percent derivation benefit to the Niger Delta region to ensure even spread of developmental projects that meet the needs of the people.

He made the promise during the visit of the Isoko Traditional Rulers Council in Delta State to the Presidential Villa in which a long list of demands including establishment of gas plant, rehabilitation of federal roads, upgrade of Ofagbe Technical College, setting up of Federal Polytechnic, appointment of Isoko indigenes as ministers and ambassadors, among others, were presented to the President.

High Chief Iduh Amadhe, who led the delegation of the royal fathers from Delta State, appealed to the President to direct the Minister of State for Petroleum, Dr. Ibe Kachukwu to call on the Management of the Nigerian National Petroleum Cooperation (NNPC) and SPDC to immediately commence production in Isoko Section of OML 28-Uzere East to increase revenue to government and development of the area.

Similarly, the monarch who is the President General and mouthpiece of Isoko people asked the government to direct the oil companies operating in Isoko land namely; NPDC, Heritage, SPDC, and AGIP to create an enabling environment for investors to convert the gas flare to electricity and for the existence of a modular refinery.

ALSO READ: Is the Niger Delta ready for the Fourth Industrial Revolution?

The traditional ruler noted that about 15 oil wells in Isoko Section of OML 28 have been locked up since November 29, 2011, by SPDC, thereby depriving the country of daily production of 19,000 barrels of crude oil, which is a huge financial loss.

He said Isoko land is a major oil and gas producing area with eight oil fields but lamented that the wealth generated from the area has been used to develop other parts of the country at the expense of the people, even when they have remained peaceful.

“It is on record that the Isoko people have not only remained peaceful but had always thrown their weight behind the government, we are not known for pipeline vandalism and no Avengers in Isolo land.

“The Isoko Nation has been grossly marginalized in the allocation of projects by this Ministry. It will gladden our hearts sir, if you may graciously direct the Ministry to remember Isoko in its activities including projects, skill acquisitions centers, and other related programmes.

“The management of NDDC should also be directed to execute projects advertised for award and completion since March 2 and give special attention to Isoko Ethnic Nationality because of our peaceful nature.

“In addition, our Isoko Riverine Communities in Sagbama Local Council of Bayelsa State should be given special attention in the area of land reclamation.”

The Council Chairman said the exclusion of the youths in the area, despite directives to the Amnesty Office to include them, might send a wrong signal that to be peaceful is a crime.

He further demanded a Federal Institution to be cited in Isokoland, particularly a Federal Polytechnic, as none exists in Delta State at the moment.

“We shall be very grateful if the State-owned Ozoro Polytechnic can be converted to a Federal Polytechnic.

“It will be appreciated also if you consider the Ofagbe Technical College in Isoko North Local Government Area, be converted to a Federal Science and Technical College (FSTC) since we have only two in Delta State instead of three.

Culled From – The Guardian