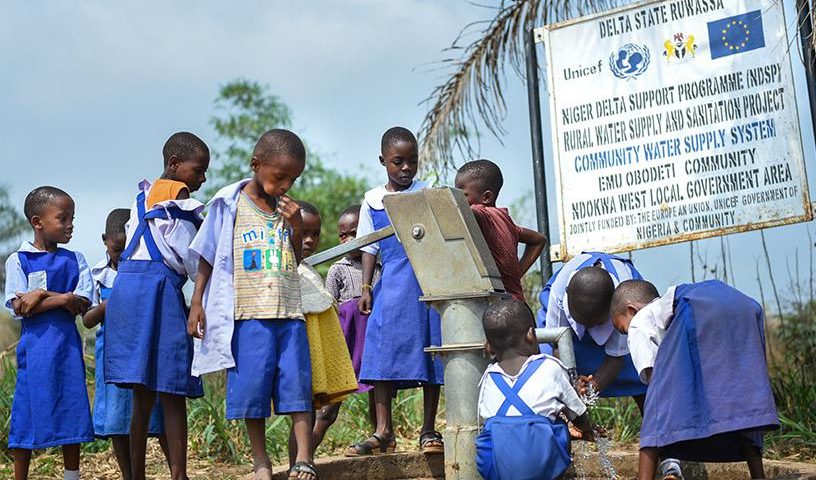 Delta State Commissioner for Water Resources, Fidelis Tilije has commended the European Union for its commitment towards the provision of potable water across communities in the state.

Tilije stated that EU had so far funded 333 water schemes in four local government areas of the state, and thanked other international donor agencies, including the United Nations Children Education Fund (UNICEF) for their funding support to the state in its determination to change the face of the water sector.

The commissioner spoke at Olieogo-Umuseti and Obi-Ofu communities in Ndokwa West Local Government Area during the official commissioning of the EU, UNICEF and Delta State Government funded water schemes in the two communities.

Tilije who described water as social and economic goods enjoined the WASH committee and water consumers association in the communities to generate little revenue from the water schemes in order to effectively maintain and sustain them.

In his remarks, Head of Cooperation, European Union (EU) Delegation for Nigeria and ECOWAS, Mr. Kurt Cornelis commended the Governor Ifeanyi Okowa led administration for what he described as result-oriented approaches adopted towards the realization of his administration’s policies and programmes particularly in the provision of potable water supply, sanitation and hygiene in the state.

Cornelis lauded the state government for the payment of its counterpart contribution to the project and urged the beneficiaries of the facilities to fashion out ways of ensuring the maintenance and sustainability of the infrastructure.

Speaking to newsmen shortly after the commissioning, the Permanent Secretary in the ministry, Dr. Mrs. Felicia Adun, who called on the benefiting communities to take ownership of the water infrastructure, described water as a sensitive commodity that played a critical role in the health and wellbeing of every human being.

In their separate remarks, chairman of Ndokwa West Local Government Area, Mr. Ifeanyi Osakwe, the WASH committee chairman for Obi-Ofu, Okpala Sunday Ajieh and Elder Ogbolu of Olieogo-Umuseti community pledged to sustain the water schemes so that the good intentions of the benefactors would not be in vain.

Culled from the Sun