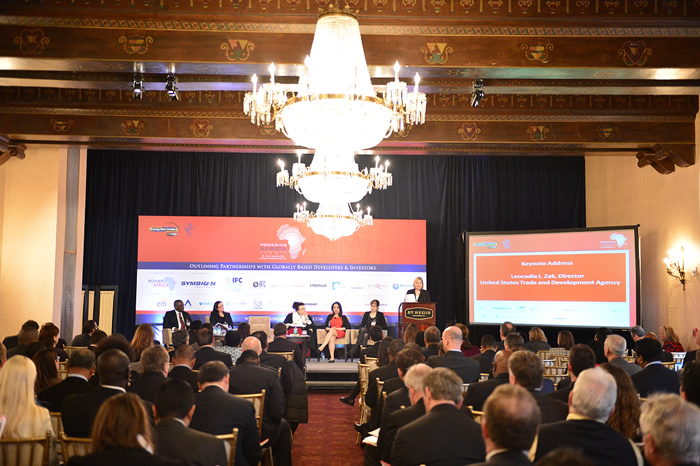 The 2nd Annual Powering Africa Summit was held on the 28-29 January 2016 in Washington D.C. The summit is a platform to showcase power, trade and infrastructure investment opportunities across the African continent. The event also serves as a platform to engage more than 400 decision makers from the United States and African public and private sectors to explore different options that could contribute to a good energy mix to meet the growing energy demands of the continent and how bankable electricity projects can be increased.

The 2016 summit brought together over 100 influential speakers and 500 participants drawn across both the public and private sectors to discuss real opportunities for investment into Africaâ€™s power sector. Some of the speakers at the summit included Andrew Herscowitz, Co-ordinator, Power Africa; Leocadia Zak, Director, United States Trade and Development Agency; Jacquis Randriamahazomanana, Director General, Ministry of Energy and Hydrocarbons, Madagacar; and Thabane Zulu, Director General, Ministry of Energy, South Africa.

The Roadmap for Powering Africa

There are currently 600 million people (approximately 120 million households) without access to electricity in Sub-Saharan Africa. Power Africaâ€™s goal of adding 60 million new connections would effectively double the number of connections in Sub-Saharan Africa by 2030 will go a long way in addressing the power needs. According to the report â€˜The Roadmapâ€™, Powering Africa in its first year focused heavily on gridscale generation transactions, recognizing their long lead-time and role in grid network expansion. With significant progress underway on MW generation target, greater efforts will now be put into meeting connections target. Power Africa has already supported projects that have the potential to lead to more than one million direct new household and business connections. Most of these connections are off-grid, and come from two sources: 50 grants from the Power Africa Off-Grid Energy Challenge awarded to organizations in nine countries (Ethiopia, Ghana, Kenya, Liberia, Nigeria, Rwanda, Tanzania, Uganda, and Zambia), and 16 projects were awarded funding through the U.S.-Africa Clean Energy Finance (ACEF) Initiative.

THE ROADMAP: A Guide to Reaching 30,000 Megawatts and 60 Million ConnectionsÂ was the culminating report released at the Summit that provides a roadmap for Africa.

Â What are the implications for the Niger Delta from the Powering Africa Summit?

Nigeriaâ€™s Niger Delta is a region with enormous economic potential. Despite the enormous energy reserves in the region, less than 10 percent of the regionâ€™s energy needs have been met, even with the privatization processes of the power sector in recent years. Power supply continues to be significantly inadequate relative to the countryâ€™s economic growth potential. Lack of sustainable alternatives to power has led to upsurge in the use of generators, which is often at a high cost for most Niger Delta communities who live on less than US$1 a day. While vast amounts of oil and gas are taken daily from these communities, reliable power is alwaysÂ never available.Â  And yet, Nigeria recently announced an increase in its electricity tariff, despite the bad state of electricity in the country, much to the annoyance of its citizens.

The Foundation for Partnership Initiatives in the Niger Delta (PIND), together with its US-based sister organization, the Niger Delta Partnership Initiatives (NDPI), is partnering with Â Development Alternatives Initiatives (DAI) to identify successful off grid power investment. After making great strides with economic growth interventions in the agricultural sector, PIND and NDPI saw power as one of the biggest constraints to widespread sectors growth and development, and in particular the agricultural sector, in the region to live up to its real potential. Therefore, an electricity value chain scoping study was conducted in 2015 that established a reliable foundation of information on the current market dynamics of the power sector in the Niger Delta.

Targeting power opportunities beyond existing electricity grid, the core objective of the scoping study report was to identify opportunities for NDPI and PIND to engage in the sector and help bridge the gap that is currently a strong impediment to private sector market growth and productivity. In 2015, there was significant progress in selecting pilot sites for a power generation and distribution investment. The same feasibility and early due diligence that a typical power investor would use alongside political economy and M4P analytical frameworks to build a successful business case for investment was done in 3 selected clusters of the Niger Delta, in Edo and Imo states. In 2016, the major focus will be on actual implementation of the findings and translating them into tangible and actionable investor interests.

The partnership approach of NDPI, PIND, and DAI will go a long way in bringing the right actors into making energy and power issues to the forefront of potential investors and governments. Thereâ€™s a real need for stakeholders in the energy sector to explore the need for partnerships in addressing the issue. PIND and NDPI are currently looking at micro and off grid options, realizing that a single solution to the power issue in the Niger Delta is not feasible and that is why they emphasis on the need to look at different alternative options while leveraging on existing projects. Public and private partnerships (PPPs) will pave way for new connections and multiple options beyond the present available solutions.

A case study of a successful partnership in solving the energy crisis is the Electricity Governance Initiative (EGI). EGI is a network of more than 30 organizations from across 10 countries dedicated to promoting transparent, inclusive, and accountable decision-making in the electricity sector. EGI partners with developing countries in addressing their energy challenges to improve power. In South Africa, for example, EGI is addressing issues related to low-carbon planning as the country is Africaâ€™s largest carbon emitter and the 17th-largest emitter worldwide. EGI also works with in-country partners to focus on the governance frameworks necessary to find holistic solutions to energy access challenges.

Case studies like EGI shows that partnerships are essential in achieving on-the-ground results that address power challenges. The first step could be helping to focus civil society attention on governance aspects of electricity sector decision-making. Read more on the Powering Africa summit here.