Terhemen Agabo: The Poverty Situation in Nigeria and Newton’s First law of motion

This morning I saw a LinkedIn notification reminding me to write a post for my audience on the professional network. I began to ponder on the aspect of poverty to write on this morning as poverty eradication lies in my passion and is my ultimate career goal. Then it dawned on me that I could write on the worsening poverty situation in Nigeria- which continues to grow over the nation like unchecked cancer. Considering the rampaging nature of poverty in the country, I also thought of analyzing the crisis in the light of Newton’s law of motion.

Newton’s first law of motion states that an object will continue in its state of motion or rest unless acted upon by an external force. Given that poverty has largely increased in Nigeria in the years, I propose that poverty will continue to accelerate and cover several more millions people in the country unless some strong intervention is implemented. And yes this is obvious especially for people in the policy space. A social crisis is bound to continue unless it is appropriately approached by a policy intervention.

Figures show that Between 1980 and 2010 poverty rose by 153.6 % which in absolute figures implies an increase from 39.2 million to 112.47 million (Nigerian Bureau of Statistics). The World Poverty clock reveals that the number of Nigerians living in extreme poverty rose from an estimated 70 million in 2016 to 90 million in 2021. 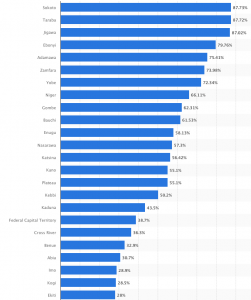 External Forces that can Check poverty

In its current state of acceleration, poverty can be arrested by three things; deliberate policy intervention from the government (or private sector and international organisations) , a positive shock in poor communities, and institutional innovation among the poor communities.

A deliberate policy intervention could come from the Nigerian government, international organisations and the private sector. At the moment, the Nigerian government is commited to social protection programmes targeted at poor people in selected communities. These programmes include the Social Safety net Programme, Home grown School Feeding Programme and N-Power. Among the many reasons while these efforts may not challenge the rising poverty numbers is poor funding and consequently coverage. Too many poor people are not included in these programmes.

The international community has been very benevolent to the country. A good number of international organisations such as the United Nations Development Programme, Danish Council, OXFAM, and others are currently working in poor communities and are providing several empowerment schemes to poor communities.

Private sector organisations such as the Tony Elumelu Foundation have given annual grants of 5,000 dollars to more than 9,000 entrepreneurs in Africa- more than 2000 Nigerians are among this number. A growing private sector will create jobs and new markets that cut across poor communities there by improving the living conditions of the poor.

Shocks are most of the time unforeseen. A positive shock could entail the discovery of a mineral resource in a community. If such a discovery is followed by a swift agreement between the government and willing private investors, then the host community will benefit from compensation packages from the venture. This occurrence could also lift an entire community out of poverty.

Very often the poor remain poor because they are excluded from market systems. For instance, poor people may most likely not be eligible for loans for lack of collateral, they may not be eligible for health insurance because they have no income to spare and they cannot access credit to engage in income-earning ventures. However, traditional innovations such as daily contributions, village money lenders, and group lending have been developed within communities of low-income earning individuals to serve their needs. There has been some evidence of such platforms leading to the improvement of livelihoods in communities.

In conclusion, the government must take the lead in the fight against poverty. On the hand, there is also need for a private sector coalition to work towards checking poverty in the country.

Terhemen Agabo is a Chevening Scholar and Nigerian Development Economist with interest in policy and development research in Africa. He has worked on projects with the French Development Agency (AFD) and Tony Elumelu Foundation (TEF) He currently writes from Brighton, United Kingdom.