On 7th of July, 2019, Nigeria joined other 53 African countries that have signed their membership of the AfCFTA with President Buhari signing of the free trade agreement. According to the African Union (AU), the objectives of AfCFTA are to:

To me as a development practitioner–just like other Nigerian development professionals who look for international development work opportunities beyond Nigeria and in Africa in particular–the news of Nigeria joining the AfCFTA is received as a would-be blessing: For one thing, AfCFTA will answer the question of ‘‘are you permitted to work in this country’’ which always comes up in applications for development job openings within the African continent.

But beyond this free movement of professionals in the area of services, in the area of goods–finish goods not just raw materials–the news of Nigeria’s member of AfCFTA is yet to go down well my throat: With my basic knowledge of Economics and my awareness of the inherent peculiarities of the Nigerian economy–in terms of low level of manufacturing and high level of importation–I have my reservations. In fact, I tend to favor some level of trade protectionism for the Nigeria situation–with emphasis on bilateral trade agreements than multilateral trade agreements.

I am among those who strongly share the feeling that there is a possibility that AfCFTA would further expand the Nigeria market as an import dumping ground. As such, in terms of volume of trade in finished goods (with all their value chain positive effect on economic growth), my reservation above seeks answers to the question of how Nigeria will benefit from AfCFTA. As a result, my economies imaginations seek answers to these pertinent questions:

It is basic economics that an economy first optimizes and harnesses its domestic market potentials in production and trade before it could benefit more from international trade–even at a regional and continental level. As such, Nigeria government must go beyond signing membership of AfCFTA (which I take as more of avoiding the possibility that Nigeria could become a loner in the realities the new AU arrangement would spring up) to coming up with time-bound strategies on how Nigeria will benefit in the continental trade arrangement. 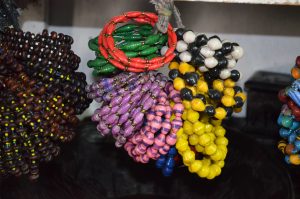 This brings us to the potential of Aba in Abia State, just like other manufacturing clusters in Nigeria–which in the spirit of AfCFTA must be maximized – and other new clusters created.  Aba has one of the biggest SMEs concentrations in Africa–with a thriving lather and garment industries among other industries.

According to businessday.ng (February 2019), one million pairs of shoes are produced by more than 80,000 leather maker in Aba each week. With 48 million pairs produced each year at an average price of N2,500 a pair, the industry is said to be worth up N120 billion, the newspaper reported. As such leather works and garment products are among the finished goods Aba can bring to the table of AfCFTA.  These industries and others which have growth potentials should be expanded – particularly in the spirit of AfCFTA.

Citing study findings presented by Professor Okechukwu Anyamele (a Professor of Economics and Finance, at Jackson State University, in the United States) at the Aba urban renewal summit in 2015, Premiumtimes Nigeria (2016) gave an economic outlook of the city as follows:

Now – in the spirit of AfCFTA – these efforts have to be doubled and tripled. As a matter of policy strategy, the Abia state government should have AfCFTA focal office in Aba. This office will work to support, educate and mobilize the producers on the market window of opportunities AfCFTA would bring. This also applies to other industrial clusters in Nigeria.

In the agricultural sector, there are evidence-based value chain products – like rice, cassava, cocoa and aquaculture – that should be leveraged on across Nigeria. Evidence of measurable and time-bound result-oriented manufacturing/production and trade based programs across Nigeria (not politicize programs), is the only way Nigerians like me can go to bed with our eyes closed – that Nigeria will benefit from AfCFTA – when it’s realities unfold.

Ogadinma Iroka is a sociologist, development practitioner, researcher, and writer. Reach him at ogadinmairoka(at)gmail(dot)com