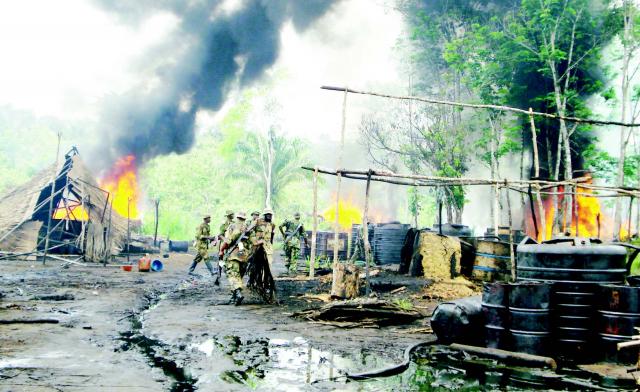 He said the navy responded to 91 alerts of suspected sea robbery and piracy, leading to the arrest of 183 suspects who were handed over to the police and the Nigerian Civil Defence Corps for trial.

The commander of the Nigerian Army contingent of the JTF, Major-General Bata Debiro said his force also conducted a wide range of successful operations which were aimed at stopping oil bunkering activities, protecting oil facilities and installations and securing the local and international shipping lanes which pass through the country’s waters.

“Over 42 armed robbers were killed and a total of 183 suspects were arrested, 40 sea pirates were also killed, 41 arrested and all manners of assorted arms and ammunition recovered from January to date.â€

JTF commander Major General Bata Debiro said 6 soldiers serving with the JTF were killed in action in the same period. Three of the soldiers were killed during gun-battles against pirates in the Andoni area of Rivers State while three others drowned in a river in the Akassa area of Bayelsa State.

He noted that cases of kidnapping were on the rise across the Niger Delta, adding that 23 kidnappers were shot dead and 236 were arrested by the JTF within its Area Of Operation (AOR) in the course of 2013.

“Additionally, 39,760 drums of illegally refined products, 570 pumping machines and 75 outboard engines used as part of the apparatus which facilitates oil theft were seized and destroyed. 46 vessels of various sizes and capacities were also impounded.

“Although limited incidents of pipeline vandalism still occur in the (Niger Delta) region, JTF operations have drastically reduced their occurrence. Those that still occur are mostly in remote areas of the creeks, carried out at night by criminal gangs who take advantage of the JTF’s limited accessibility of the difficult terrain,” Debiro said.

Meanwhile, the Nigerian Navy has installed a Regional Maritime Awareness Capability Centre (RMAC) system made up of eight automated, camera-equipped surveillance towers in the waters off its coast as it steps up measures to tackle piracy and crude oil theft within its maritime domain.

The equipment, which was sourced from Japanese company Furuno, uses high frequency radio and long-range cameras to detect all ships within a range of 48km from the observation tower.

Ezeoba said information collected from the surveillance towers is beamed to a central naval intelligence room where it is checked against ships’ registration, flag and other essential identity information.

“From the domain awareness centre we can see ships coming or leaving our maritime space. It also gives us the ability to ascertain the actual threat the (approaching) vessel poses.”

Four of the surveillance towers are located in Lagos, one each at the Bonny and Brass crude oil export terminals (Niger Delta), one in Yenagoa and one in Ibaka in the eastern Akwa Ibom state.