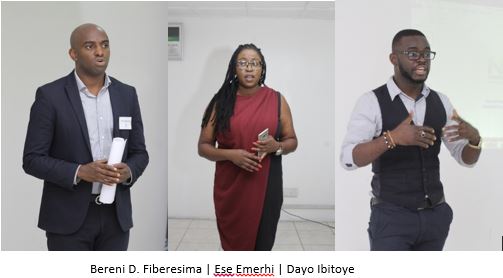 After a year of monthly Sunday learning and working sessions of â€œStartup Sundayâ€, Netopps and NDLink decided to hold a review session to highlight some of the key points of learning discovered over the past year in a Colloquium titled Startup Sunday Port Harcourt: Collaboration for a Sustainable Ecosystem. The event was held at the Foundation for Partnership Initiatives for the Niger Deltaâ€™s (PIND) Economic Development Centre in Port Harcourt Â on Tuesday, July 12th.

The Colloquium kicked over with a review of the objectives of Startup Sunday by Bereni D. Fibeeresima, CEO of Netopps. He noted that Port Harcourt really does not have much of a supportive startup ecosystem for entrepreneurs, resulting in the loss of business and talent to other more progressive areas of the country like Lagos or Abuja, that have structures in place for businesses to start and thrive. The concept of collaboration and partnership, especially in leveraging dwindling resources, is particularly absent in Port Harcourt and this is often one of the biggest challenges entrepreneurs face in Port Harcourt.

Ese Emerhi, Advocacy Program Manager for PIND. PIND is a non-profit organization working to build partnerships for peace and equitable economic development for the region; PIND leverages its extensive local knowledge of the Delta, its market driven approach to key interventions, and access to market and peace actors, technical expertise, data resources and network of over 600 partners to bring real value to development work in the Niger Delta. PINDâ€™s core aim is to reduce poverty by acting as a catalyst for systemic change in the region through four thematic program areas â€“ economic development, peace building, capacity building, and analysis and advocacy. PIND is founded on a strong theory of change, which recognizes the interrelatedness between conflict and poverty, and this is why its market-based economic development and peace building interventions are mutually reinforcing and address the root cause of conflict and poverty in a localized and sustainable manner.

One of the projects of PIND is the Niger Delta Link (NDLink) â€“ an online communications platform for development practitioners in the region to connect and collaborate, learn from each other, and share news about development activities by national and international donor agencies. Dayo Ibitoye, NDLinkâ€™s Content Coordinator, encouraged participants at the Colloquium to join the over 3,000 members of the platform to connect and share resources.

Session One: The challenges of operating in the Port Harcourt business environment

Tammy Tamarakro, co-founder Mapadom, an online business directory, mentioned the low tech literacy of the city, which was a problem for them as they tried to get as many businesses to gain online visibility. Maple Dappa of Faples.com, an online clothing shop, also mentioned the poor talent pool in the city and there was a general consensus that Port Harcourt needed a hub or an incubation program to help startups access resources, including locating the right team members.

Another problem that was raised was the poor media visibility of Port Harcourt. One challenge which startups in Port Harcourt face is the lack of media coverage and poor PR. Bereni pointed out that the internet had removed boundaries and access to resources and it was time for the Port Harcourt business community to leverage the internet and social media to tell their stories and control the narrative about Port Harcourt. Leaving the story for others to tell was no longer an option.

Gino Osahon, Manager of the Google Developers Group (GDG) Port Harcourt, raised the issues of gaining access to stakeholders and potential sponsors. He pointed out that the Port Harcourt GDG received the bulk of its sponsorship from Google and from Netopps. He felt that there should be a platform through which other sponsors could be accessed.

When the issue of multiple taxation was brought up, Mercy Ikeji of Dezionite.com.ng, a cleaning firm, gave a detailed explanation about how the taxing system works. She broke it down in a simple and humorous way so that everyone learned a lot from her about taxation at the national and state levels. 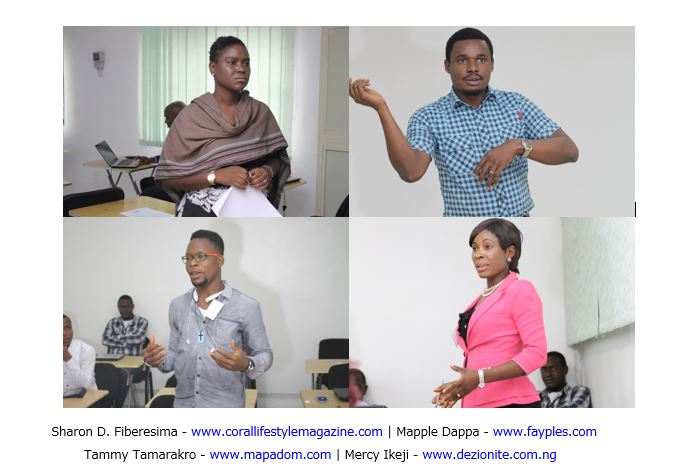 A key question for this session was spotlighting programs and initiatives that cater to the startup community. Participants were able to share their experiences with the following organizations, programs, and initiatives:

However, Bereni pointed out that what is critical right now was not in spending limited resources looking elsewhere but in leveraging the opportunities and resources that were in the room. He made reference to the â€˜six degrees of separationâ€™ theory stating that each person was not more than 6 people removed from anyone else in the world. He said we should not take what we had for granted and that we should each find out how we could tap into each otherâ€™s networks. 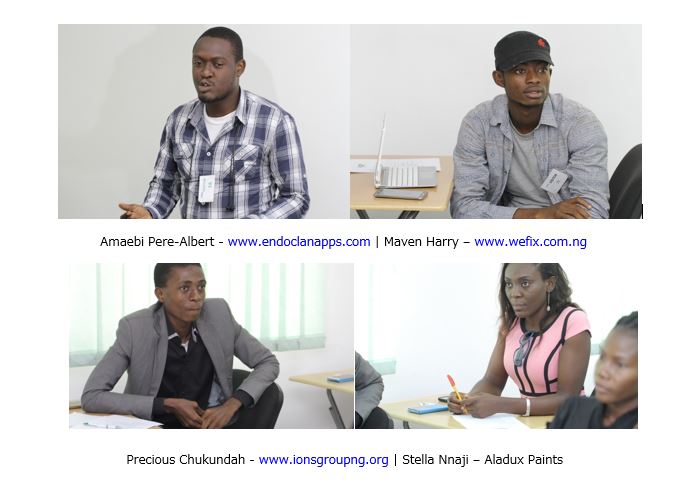 Â Session Three: The role of government in building an ecosystem

The role of government is to ensure and create an enabling environment for local businesses to thrive, by putting in place polices and structures that are not burdensome to entrepreneurs.

Amaebi Pere-Albert of Endoclan Apps, an online gaming company, spoke about the confusion with his taxes. He said his firm is registered in Nigeria but as most of his customers were in the United States, he is expected to pay taxes to the United State Government. Maple Dappa spoke about the need to be strategic in dealing with government as the government usually viewed things along partisan lines. The general consensus was that it is best if entrepreneurs stay clear from partisan politics and they could easily get tangled up in hostilities, putting a stop to their business enterprises.

The following startups pitched their business ideas to the captive audience in the room during the working lunch session:

Ebika Pere-Albert of Nigeria Info 92.3 FM, gave a small talk about how impressed he was with the startups and invited anyone to get in touch with him if they wanted to be featured on radio. This got everyone excited.Â Â

We broke into six groups to discuss the various topics. At the end of the allotted time, each group made a presentation, which included recommendations. Below are the topics and the recommendations:

Â 1: Collaborating with the media

Security is a government issue and we are limited in what we can do, however these were some recommendations:

Â 3: Integrating the Expat and Diaspora Community into the Ecosystem

4: Integrating funders and High Net-worth Individuals (HNIs) into the ecosystem 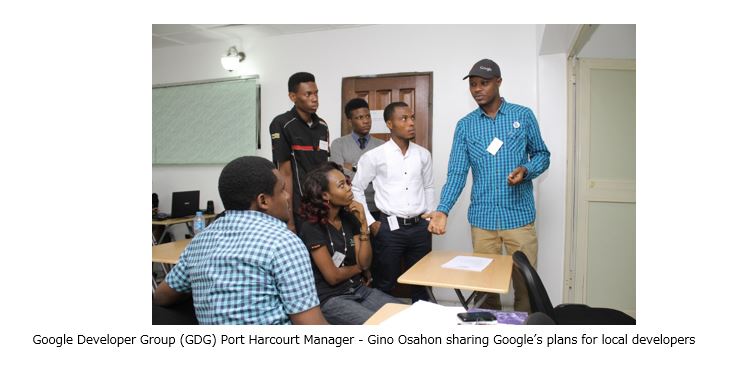 The feedback received from the group was impressive:

Â The colloquium gave us the opportunity to gather stakeholders in the Port Harcourt startup ecosystem, particularly past pitchers of Startup Sunday, and to gauge the pulse of the ecosystem. Â A few issues with the ecosystem include importation of talent and lack of skill development platforms in Port Harcourt. An example of the latter was Maven Harry who was sent by Intels to a hub in Lagos for training. Precious Chukundah and Maple Dapper are another example of startups that provide top quality service and products, but face a situation where clients would rather patronise businesses outside of Port Harcourt because of perceived stereotypes.

As a result of challenges and issues, Netopps came up with the action plan below: