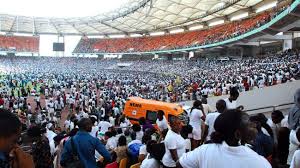 Views: 1,127
Imo State citizens based in South Africa have disclosed plans to partner with the Imo State government for the industrialization of the State and job creation which could engage about 3,000 youths.
The group under the aegis of â€˜Imo State Unionâ€™, made this known through their leader, High Chief Kelvin Ike when they paid a courtesy visit to Governor Okorocha at the Government House Owerri recently. Â  During the visit, they donated about 45,000 exercise books to the State in support of the free education programme which they believe is a fundamental manpower development project and a veritable tool for economic growth.
Â In a speech at the occasion, Governor Okorocha commended the group for being organized and supportive of the Rescue Mission administration and for the exercise books they donated to school children in the State. He promised to create â€˜South African Diaspora Villageâ€™ in the State where citizens of Imo State based in South Africa will stay whenever they visit the State. He assured that community Government Council would be extended to the group in South Africa with a Desk Officer appointed in his cabinet for effective communication and management. He expressed hope that the group would attend the Imo Carnival rescheduled to hold in October this year.
Speaking earlier, High Chief Kelvin Ike requested for the inclusion of the group in community government council (CGC) and provision of office in Nigeria while he disclosed that about 5,000 Imolites were in South Africa. He assured the present administration of their unalloyed support.
Another member of the group Chief Tobechukwu Ehirim stated that they were highly impressed with the achievements of the present administration which informed their decision to be partners in progress with the State government.
He disclosed that the Rescue Mission was the first administration, the group identified with since the history of Â Imo State, adding that they were ready to â€œbring investmentâ€ to the State as well as mobilize people and resources for further development of the State.