How PIND will Support the #HeforShe Campaign

3 Things You Should Know about Dr Tedros Adhanom Ghebreyesus, WHO DG-Elect 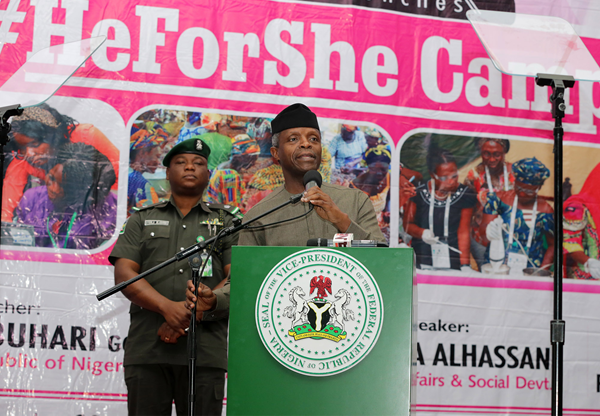 I recently attended the Nigerian launch of the “HeforShe” campaign in Abuja. I was at the event with PIND’s Gender Desk Officer in Abuja, Ifeyinwa Nwosu. For those that don’t know, “HeforShe” (HFS) is a global campaign initiated in 2014 by the then UN Secretary General, Ban Ki Moon to promote inclusiveness in addressing gender issues by mobilizing boys and men to become advocates and champions for gender equality and women’s empowerment all over the world.

The project’s target is to engage one billion boys and men globally to be in solidarity with women in pursing the removal of social and cultural barriers that prevent women and girls from achieving their potentials. The campaign in Nigeria is led by the Federal Ministry of Women’s Affairs & Social Development with the technical and financial support of UN Women

The UN Women Representative to Nigeria, Ms Comfort Lamptey, said Nigeria was the fifth country to officially launch HFS after Cape Verde, Liberia, Sierra Leone and Senegal. She said globally, more than 1.1 million boys and men had joined before the launch in Nigeria.

The Minister of Women Affairs, Senator Aisha Alhassan, although did not mention a specific target for Nigeria said six high profile men from six segments of the country have been selected to lead the campaign. They are drawn from the executive, the judiciary, legislature, academia, private sector, traditional/religious institutions from all geopolitical zones. PIND Foundation will identify with the Champion in the Niger Delta and will also work with the Development Partners Group on Gender (DPGG) to contribute to results of HFS.

Acting President, Prof Yemi Osinbajo, signed the register to be a Champion of HFS. In his emotional remarks, Prof Osinbajo said over 40 per cent of girls on the average are illiterate and illiteracy means that they would not find decent livelihood and are likely to be married-off early, discriminated against in inheritance rights or punitive widowhood practices and would work the hardest on the farms and long hours in the markets and earn far less than men. He said even the most educated or the best educated of women will probably, several times in their working lives be subjected to one form of gender based discrimination or the other.

PIND Foundation remains committed to mainstreaming and contributing to the achievement of the Goal 5 of the Sustainable Development Goals which is to; “Achieve gender equality and empower all women and girls”. Since the launch of the “Commission on the Status of Women” in 1946, the United Nations has sustained global efforts over the years to eliminate gender inequality and empower women and girls all around the world, but boys and men have a major role to play to ensure the actualization of this goal. Thus underscoring the importance of the #HeforShe campaign.

You can visit the HeforShe website to learn more about the project.