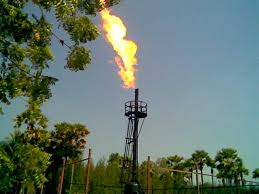 Delegates at plenary yesterday have agreed that communities in the Niger Delta region be paid adequate compensation for gas flaring that has affected their lives and environment.

It was equally resolved that proceeds from pollution tax to be collected from oil companies be used to clean up communities that are impacted by oil spill.

These decisions by delegates at plenary were part of many resolutions by the conference during the consideration of the report of the Standing Committee on Energy yesterday.

Conference delegates demanded immediate initiation of efforts to clean-up oil spill and restore degraded environments in the Niger Delta in line with the recommendations of the United Nations Environment Programme (UNEP).

In order to make fuel supply available to people in the riverine areas, Conference resolved that government should investigate why the floating petrol stations built in the past have not worked, and take steps to resuscitate them.

It was also resolved that government finds immediate means of improving gas supply and transmission to ramp up power delivery to the system as a solution to current cash shortfall in the sector.

In addition, Conference said government should implement the National Gas Plan whose main objective is to transmit gas to all the states of the federation for industrial and domestic use and to the Independent Power Projects.

Delegates however voted for a declaration of a state of emergency in the power sector in line with the promise made in 2008 by the late President Umaru Yarâ€™Adua during a visit to France.

It was however resolved that government should release take-off grant to the Hydro Electric Power Area Development Commission (HYPADEC) so that communities in river banks would have access to power.