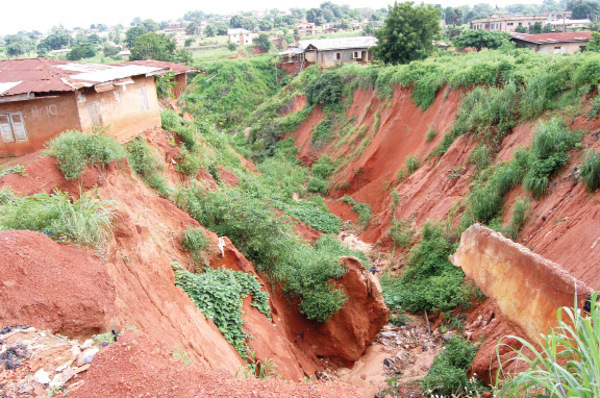 The Federal Ministry of Environment in partnership with the World Bank have launched the Nigeria Erosion and Watershed Management Project (NEW-MAP) to tackle erosion and environmental insecurity in Imo State.

During the official launching of the project at the Government House, Owerri, the Imo state Capital, the World Bank Task Team Leader for the project, Dr Amos Abu, said the project is aimed at reducing the vulnerability to soil erosion and also address the challenges of land degradation.

He said the World Bank has approved a $508 million grant to assist the Federal Government tackle erosion challenges.

Dr Amos revealed that the project is an 8 year innovative and multi sectoral project which requires a counterpart funding by state governments who are beneficiaries of the project.

He said that the design for each erosion sites in Imo state has already been contracted and work will commence on the sites.

Meanwhile, the state governor, Rochas Okorocha, who was represented by the Secretary to the Imo State, Anthony Anwuka, said the state government is aware of the importance of the project and the problem erosion has caused the people of the state, adding that this prompted the Okorocha led administration to hurriedly pay their own counterpart funding of N100 million to hasten up the commencement of the project in the state.

Meanwhile, the State Commissioner for Petroleum and Environment, Prof Okey Okoro, pleaded with traditional rulers and community leaders to cooperate with the government in actualizing the project and assured the people that in no distant time, those erosion sites in the state will become a thing of the past.

The World Bank has also chosen states in the south south and south east regions of Nigeria to benefit from the partnership.