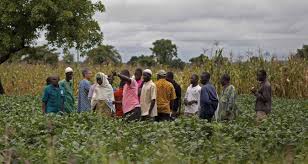 Edo State government says it has empowered peasant farmers with the sum of N104.138.698.32 million under the Community Based Natural Resources Management Programme (CBNRMP).

Abdul Oroh, the state commissioner for agriculture and natural resources, gave the hint in Benin City during a meeting with the country programme manager of IFAD, Toda Etsuko.

The interventionist agency is geared towards improving the socio-economic status and the living standard of at least 44,444 people in the rural poor with emphasis on women and youths, Oroh said, saying that nine local government councils out of the 18 councils in the state were participating in the programme.

The commissioner posited that the programme had facilitated a total of 8,941 hectares of land under improved cultivation and that the beneficiaries had cultivated 2.5 hectares as against 0.5 hectares earlier cultivated in the previous years.

The programme has so far implemented a number of social infrastructure such as construction of seven bore-holes, rehabilitation of primary schools, provision of desk at Udo-Neira Primary School in Igueben and Uneme-Erhurun Primary School in Akoko-Edo, engaging widows in livestock enterprise and promotion of eight aquaculture, among others.

While describing the programme as a huge success in the state, the commissioner opined that the achievements so far recorded were verifiable which he noted were evidence in all the participating communities across the state.

The state government is currently evaluating some of the key IFAD, FADAMA 111 projects as well as ECOWAS fisheries accelerated development programme in the state as the outcome of the reports has since been presented to the office of the state governor for necessary action, he said.

He also disclosed that the programme had inculcated a saving culture on the peasant farmers as well as other beneficiaries through the Microfinance Trust Bank.

Toda Etsuko, however, commended the state for being one of the best performing states in the country, saying the purpose of the meeting was to build on the achievements and experience of IFAD/FGN/NDDC, Community Based Natural Resources Management Programme and the economic opportunities that were developed by the programme.

He disclosed that a new programme, known as â€˜Rural Agro-Business Sector Enhancement Programmeâ€™ (RAISE) was being proposed to take over from IFAD, as the proposed â€˜RAISE,â€™ which will immediately commence in 2015 at the termination date of IFAD, will build on its achievements, successes and methodologies to increase income of women and youths in the participating states in the country.