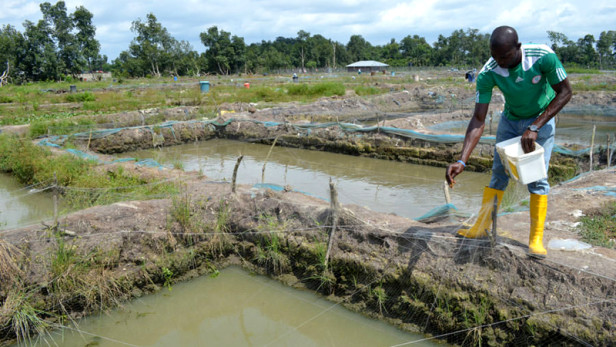 Fish farming is one of the value chains that the Partnership Initiatives in the Niger Delta Foundation, a collaboration between Chevron and DAI, is strengthening in order to create jobs and increase incomes. Can development contractors â€” well versed in government donor funding â€” work with big corporate brands to implement development programs? Photo by: DAI

As the development donor landscape continues to evolve, large corporations like Chevron, Wal-Mart and Coca-Cola are increasingly emerging as development financiers and are driving economic growth in the poorest communities. And theyâ€™re doing so in part by partnering with the development community.

Corporate partnerships have become key sources of funding and resources for nonprofit development organizations such as Mercy Corps, which has teamed up with Starbucks, Mastercard, Google, Wal-Mart, Chevron, Coca-Cola, Warner Bros., Nike and others for their development work.

But what about the for-profit development organizations out there?

Can development contractors â€” well versed in government donor funding â€” work with the likes of Coca-Cola and Starbucks to implement development programs?

It seems like a natural business relationship â€” a corporation with an interest engaging on development challenges, hiring a development contractor who knows what itâ€™s like to run a private company, yet whose business is global development.

Examples of partnerships between for-profit development companies and corporate brands are beginning to emerge. One such partnership is Chevron and DAIâ€™s five-year collaboration on the Niger Delta Partnership Initiative, which is designed to find market-driven solutions to local economic problems in order to reduce conflict and improve economic stability in Nigeriaâ€™s Niger Delta.

DAI came on board in 2010 to help NDPI establish a robust economic development and monitoring and evaluation program. DAI helped to foster local capacity building that included training and mentorship in the region, and were â€œthought partners,â€ introducing feedback and ideas into the program, said Johanna Nesseth Tuttle, manager for development and public policy at Chevron.

Fostering partnerships with corporate brands is a growing priority at DAI. In 2014, the development company established a separate business unit called the Energy Resources Group, which is dedicated to partnerships with private sector clients such as Chevron.

â€œWe consider [the private sector] to be as important â€¦ as any national government or donor,â€ Francis DiMora, head of DAIâ€™s Development and Resources Group told Devex, adding that multinational corporations often put billions of dollars in a countryâ€™s economy and can commit to decades of investing.

Other for-profit development organizations are making corporate partnerships a priority as well. Chemonics set up a corporate partnerships practice just over a year ago, and has since partnered with Ivanhoe Mines and Fio Corp. on a project designed to improve malaria diagnosis and data collection in the Democratic Republic of the Congo, among other successful collaborations.

And while corporations still overwhelmingly partner with nonprofits for their social investment work, there are some that arenâ€™t shying away from reaching out to for-profit contractors.

Josh Leland, director of Corporate Partnerships at Chemonics, told Devex that even in the years prior to the establishment of their corporate partnerships practice, corporations were coming to them expressing curiosity about their work and an interest in collaboration.

An area for growth?

Recent examples of successful partnerships between for-profit development organizations and corporations as well as efforts among the contracting community to prioritize corporate partnerships all point to a potential area for growth.

â€œI wouldn’t say thereâ€™s a dramatic or tectonic shift here at all, but I think itâ€™s an evolution,â€ Leland said, adding that Chemonics is now focused on â€œbuilding, maintaining, and facilitating relationships with the corporate sector.â€

But there are still some hurdles to keep in mind.

Large multinational corporations for instance, can sometimes find it easier to partner with nonprofit organizations because of rules and regulations already in place, said Chevronâ€™s Nesseth Tuttle.

â€œ[For-profit development companies] bring really high value skills and knowledge and capabilities â€” but to engage with them in a social investment project can require really just more vetting and compliance,â€ she said.

â€œAny business opportunity or market or area of growth has to be seen in relation to the existing markets of development that are already out there,â€ he said. â€œOur commitment to good development means we need to be able to bring those solutions to a multitude of clientsâ€¦ whoever the partner isâ€¦ we need to be prepared.â€

Still, development companies can take some practical steps and follow some time-tested partnership advice if they want to foster successful business relationships with large corporations. And in doing so, they can help to shape the future market for partnerships.

For-profit development companies looking to do more work with corporations will need to rework how they communicate â€” some corporations want a powerpoint or a video â€” and most want to speak often, said Graham Craft, director of corporate and foundation partnerships at Mercy Corps.

â€œWe communicate with corporate partners much more frequently [than with other donors],â€ he said, adding that corporations take the partnership language seriously and want to be in frequent dialogue that isnâ€™t bogged down with technical language.

The foundation for successful partnerships is trust, which comes from building and nurturing relationships, Leland said, adding that persistence, patience and flexibility are also essential traits.

Successful partnerships emerge out of a â€œcommon problemâ€ to be solved rather than â€œbusiness development in the traditional sense,â€ said Nesseth Tuttle.

â€œI think partnerships have to be viewed as vehicles to achieve a goal rather than just vehicles to improve funding opportunities,â€ she said.

When Chevron seeks out a partner, it looks for â€œalignment of vision,â€ â€œstrong implementing capability,â€ â€œability to share learnings and ideas,â€ and â€œflexibility of resources,â€ Nesseth Tuttle said, adding that partners should have a large footprint in the community or country where the project will be. Having additional sources of funding is going to be increasingly important, she added.

Jeff is a global development reporter for Devex.