While in the field, BMI SCAT Team Leader Nicholas Story demonstrated a large area now remediated and planted with thousands of young mangroves, noting “this is what success looks like” to the cheering of the visitors who were personally aware of the previous level of site contamination. He further described the substantial effort put forth by all parties involved including the remediation workers from Bodo and the SCAT (Shoreline Cleanup Assessment Technique) Team which verifies that each cleaned area fully meets all Project standards as mutually agreed upon with the regulatory agencies, the Bodo Community and SPDC (The Shell Petroleum Development Corporation of Nigeria).

In observing the results, the Community’s legal representative, Mr. Dan Leader, who had been involved with the effort since 2010, expressed great enthusiasm saying, “it’s obviously one of the most extraordinary sites I have ever seen; it looks like an almost complete recovery of the mangrove ecosystem, though there’s still some work to be done”.

Mr. Leader, in a follow-up note further acknowledged that “After 10 years of pushing tirelessly for clean up, I was astonished and moved by the progress which has been made on remediation. The mangroves are recovering, large areas of new mangrove habitat are being replanted and the artisanal refining areas are being remediated. The impacted mud is being flushed to clean up the oil. Over 1,000 people have been employed by the community to clean up and a cottage industry of mangrove seedlings has sprung up to sell to the contractors for replanting.”

“I was told by excited Shell representatives that this was a model clean-up for the Niger Delta. How far we have come from those days where no one really thought clean-up was possible or would ever happen.”

“I want to pay tribute to the work of all those involved in the clean-up process, the BMI, the Dutch Government, and the Nigerian authorities. This project shows that with collaboration, determination and good will miracles can happen.” 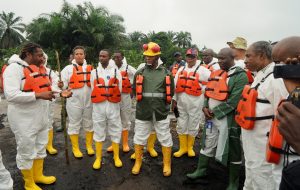 Another member of the Project’s management team representing the Dutch Embassy, Prof. Nenibarini Zabbey, expressed satisfaction to be part of the remediation and restoration process as it has recorded tremendous progress. While recounting the trajectories of the process, he stated that he used to fish in the pristine creeks of the community. “I also carried out my Ph.D. research on the Bodo Creek, where I took water and benthic samples for my thesis. Prof. Zabbey is presently the Coordinator of the Centre for Environment, Human Rights and Development (CEHRD).

He further acknowledged that the visible changes he has seen from the remediation effort is unprecedented and will help to aid the restoration of the Bodo mangrove ecosystem to near what it was prior the oil spill and will serve as a reference for other remediation efforts within the Niger Delta region. “All the critical stakeholders, including the government regulators, civil society, and the local community, now believe this is the sustainable pathway for rehabilitating the oil-contaminated estuaries”. Concluding, he affirmed that “with a united determination, we will succeed on the Bodo Remediation and Revegetation Project!”.

The visit was a culmination of an effort of collaboration and respect begun over a decade ago.