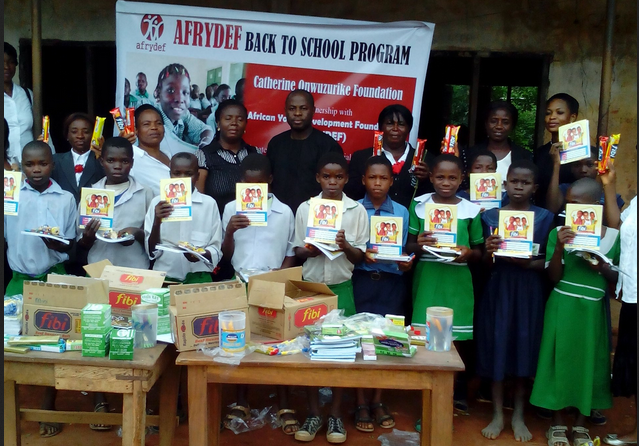 Speaking at the event, the President General of the Community, Hon. Donatus Osuji, who represented the traditional ruler alongside the CLO/Legal Adviser of the Community, Chief Barr. Obiefule Innocent said they were so excited to have the team in their community and thanked us for coming to encourage their kids with books and other materials.

In her own speech, the Headteacher of the Community School, Mrs. Obi expressed her profound gratitude to AFRYDEF and the Catherine Onwuzurike Foundation led by an indigene of the Dikenaofeiyi Community, Mrs. Nkiru Homann for coming to the aid of their children who are in dire need of help to assist them in their education.

Speaking earlier in his opening remarks, Hon. Remy Chukwunyere said that they were in the community to interact with the children on behalf of one of their daughters, Mrs. Nkiru Homann, who he said passed through the community school.

According to him, Mrs. Nkiru Homann decided to partner with AFRYDEF in order to give back to the community, which contributed immensely to her upbringing while she was growing up.

He also said that the programs of both organizations are in tandem with the activities of the State Government led by His Excellency, Owelle Rochas Okorocha and said this gesture is their own way of supporting the Governor and his good intentions for the people of the State.

Books and other materials worth thousands of naira were distributed to the kids who were overjoyed by the visit. Rapido Foods, Nigeria, makers of the tasty and our favourite sausage, FIBI provided lunch for the kids and their teachers.