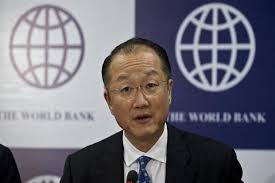 The World Bank says it is reviewing its Country Partnership Strategy, CPS, to help the Nigerian Governmentâ€™s effort, both federal and state, to build a stronger economy that is capable of creating jobs and promoting inclusiveness.

The new partnership strategy jointly developed with the Federal Government supports the countryâ€™s Vision 20:2020 objectives and its Transformation Agenda.

The strategy includes support for a bold and ambitious programme of development targets and interventions for the next four years between 2014 and 2017.

The World Bank Country Director, Marie-Francoise Marie-Nelly, said at the pre-launch media briefing on Monday in Abuja that the CPS was structured around three strategic priorities. These were promoting growth and job creation by reforming the power sector, enhancing agricultural productivity, and increasing access to finance.

It also covers improving the quality and efficiency of social service delivery at the state level to promote social inclusion as well as strengthening governance and public sector management, with gender equity and conflict sensitivity as essential elements of governance.

The director said under the previous strategy the World Bank had worked with a few lead states but had decided to move away from this strategy to a broader engagement process with the grassroots to impact more people.

Under the new arrangement, she said the Bank intended to take on an enlarged number of states that have a high level of commitment to good governance, reforms, and promotion of priorities that take into account their peculiar geographical balance.

The new strategy would also focus attention on developing a social safety net platform in continuation of the effort by government in human resource development. It would also help work on the governance structure by strengthening the on-going reforms at both the federal and states levels and creating opportunity for social accountability.

â€œWith the strong economic resources base that Nigeria now has, we need to accelerate the skill base to create more opportunities. The role of power supply is important. That is why the World Bank has resolved to ensure that 25 per cent of its resources would be directed into the power sector,â€ she said.

She gave assurance of the World Bankâ€™s readiness to support the Nigerian Government to continued partnership with all stakeholders. She also said to move the country forward, the Group would help facilitate faster economic diversification away from oil and build stronger growth and increased productivity to create jobs, boost competitiveness and accelerate poverty reduction.

Highlighting the countryâ€™s achievement under the Bankâ€™s strategic partnership, Ms. Marie-Nelly said the recent reassessment of Nigeria as the largest economy in Africa had put the country in a better position to attract more investments.

She said according to a recent report by the United Nations Conference on Trade and Development, UNCTAD, based on the new assessment, Nigeria received the largest (more than half) amount of foreign direct investments, FDIs in West Africa.

Nigeriaâ€™s economic performance, the director said, has been recognised by a number of institutions and rating agencies, particularly the World Bank, on policies and institutional arrangements as well as indicators on how countries were actually making progress on their development agenda.

â€œThe partnership of the World Bank with Nigeria is very strong. Itâ€™s a partnership that has deepened since 1999. We want to build more on the governance structure, even as the security challenges the country is facing are acknowledged. Our idea is to sustain what we have been doing; deepen our effort in being more selective,â€ she said.

The Minister of Finance, Ngozi Okonjo-Iweala, expressed delight at the launch of the strategy paper, which she said defined the World Bankâ€™s support to Nigeria for the next three to four years in the medium term.

She said she was particularly delighted that the paper was not only in support of the governmentâ€™s transformation agenda, but also worked with individual states where about 50 per cent of the countryâ€™s resources were spent.

She said the expanded focus of the World Bank on the states would help create jobs, pointing out that even in face of the economy growing, the issues of growing inequalities has underlined the need to improve inclusion in the economy.

â€œThe country strategy paper is designed to help Nigeria do better in these areas,â€ Mrs. Okonjo-Iweala said. â€œTo create jobs government has invested a lot in the power and other productive sectors of the economy, like agriculture, access to finance to SMEs and housing.â€

The Minister commended the World Bank for the support to the social sector, particularly education, as well as its help to strengthen the governance issues in the areas of financial management to stop leakages.

She acknowledged the support the World Bank has been giving to Nigeria in the last 14 years. She said that this had resulted in the rapid build-up in World Bank assistance to Nigeria on annual basis from about $80 million a year in 2000 to about $1.7billion projected for 2014.

The Minister said the improvement of Nigeriaâ€™s Country Programme Institutional Assessment, CPIA, indicator from 3.5 to 3.6 per cent against the African average of 3.2 per cent, was very encouraging, pointing out that that the strategic paper would help improve the record further in the next three years.

â€œThe strategy marks Nigeria as a country that can borrow on the most favourable terms at zero interest rate or 0.7 per cent commitment charge over 10 years of grace, because Nigeria has now become a larger economy with a higher per capita income,â€ she said.

Nigeria has been declared credit worthy for the International Bank for Reconstruction and Development, IBRD, financing and officially entered blend status from July 1, 2014. This means Nigeria can access World Bank Group funds through the International Development Association, IDA and the IBRD.