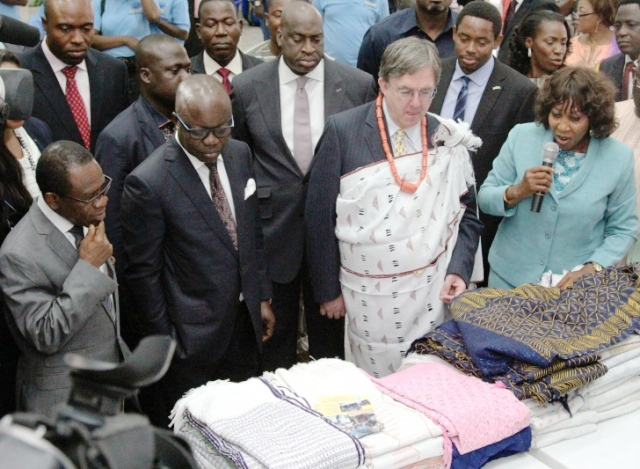 The British Government has expressed readiness to invest in Delta State and assist the state to develop its potentials to grow the economy.

British Deputy High Commissioner to Nigeria, Mr. Peter Carter who disclosed this in Asaba yesterday during a visit to the state Governor, Dr. Emmanuel Uduaghan, said that the United Kingdom was encouraged by the infrastructural development and incentives put in place by the administration.

According to him, the British Government is impressed with the infrastructures on ground especially the Asaba airport, the wastes incinerator plants, the Ogidigben Gas city project, the Warri Industrial Business Park, among others.

“I am here to personally see the infrastructural development progress you are making in the state and the business opportunities in the state for the British government and British businessmen,â€ he stated.

Furthermore, he said: â€œAfter seeing some structures put in place by the Uduaghan’s administration for investment to thrive, British businessmen as well as the British Council will be delighted to invest in the state.â€

â€œI am convinced that the United Kingdom has a role to play in developing the economy of Delta State, your airport terminal (the Asaba International Airport) is head and shoulders above the ones I have seen in Nigeria. Asaba deserves to be the hub of aviation in Nigeria.â€

â€œI congratulate you for your achievements and I look forward to growing the partnership between Delta State and the UK and the private sector for the mutual benefit of your state and my country.”

Carter promised to bring the British Council with its creative initiative and the creative sector in the state to promote and develop the creative potentials of the people of Delta State, adding: â€œthe creative industry is a huge driver of a successful economy as it creates jobs, export talents and build essential human capital.â€

In his remarks, Governor Uduaghan urged the British government to show more interest in developing the economy of Delta State.

Uduaghan observed that as traditional ally to Nigeria, the British government should show more commitment towards doing business in the state and country in general.

According to the Governor, British businessmen can invest in the Warri Industrial Park, the Ogidigben Gas City project, in the area of agriculture, solid minerals, among others, noting that the Nigerian population which is mainly made up of youths also, provides ready market for the industrialists.

“There is a historical tie between Nigeria and United Kingdom and we are happy to be part of that historical tie,” the Governor said, adding, â€œthere is need for improved commercial activities between the UK and Nigeria especially, Delta state because, Chinese and India are now showing their presence in Nigeria and Delta State.”

“Delta State is not only the headquarters of Nollywood, we are naturally talented in the area of comedy and music and I am happy when you talked of the British Council and its creative initiative, we will work with them to improve our creative youths.”

He stated that the state is secured for business, observing that security challenges have been reduced to the barest minimum while institutional structures have been put in place to check corruption and give confidence to investors.