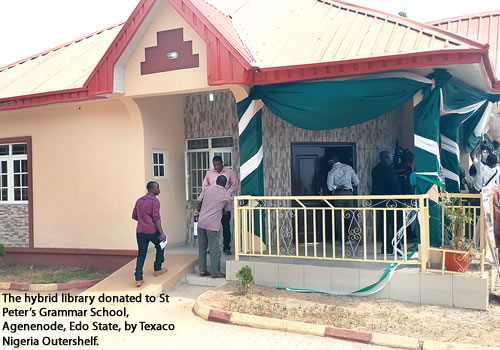 At the commissioning of the modern library that is located inside the premises of the school, Director, Deepwater Operations of Texaco Outershelf, Mr Jeffrey Ewing, disclosed that the library was equipped with modern books, 21 internet-connected computer systems, a state-of-the-art system server, a database of electronic library books stored locally on the server, VSAT internet connection, a 20KVA generator, an inverter back up and water borehole.

Ewing noted that the hybrid library was part of what he described as social investment plan of Texaco Outershelf, adding that the project was completed with the support of the National Petroleum Investment Management Services (NAPIMS), Edo State government, Edo State Ministry of Education and the management of St Peterâ€™s Grammar School, Agenebode.

In his address, the Group General Manager of NAPIMS, Jonathan Okehs, said NAPIMS believed that investments in the oil and gas sector should not just be about â€œnuts and bolts in the industry, but the people as well,â€ remarking that â€œmanpower development is a crucial aspect of our investment.â€

Okehs, who challenged students to make the best use of the library, stated that investments such as the library project would go a long way in addressing the dearth of skilled manpower in the oil and gas industry.

Principal of the junior arm of the school, Tom Akagbazo, assured the donors of efficient usage of the library, expressing appreciation to the donors as well.

Edo State Commissioner for Environment, Prince Clem Agba, who represented Governor Adams Oshiomhole, said the state government valued education so much, hence its commitment to the provision of conducive environment in schools in the state. â€œThis is the reason we went round schools upon our assumption of office in January 2009. What we found during the assessment tour was astonishing. As a matter of fact, the classrooms then were like poultries.

â€œWe had to revolutionise the system in terms of quantity and quality and St Peterâ€™s College was one of the first beneficiaries. Today, parents donâ€™t pay fees from primary to secondary schools. Government has also abolished PTA fees.

â€œComrade buses are now available without charges to transport students to and fro. Enrollment in our public schools has also increased by 50 per cent since the intervention.

â€œHaving a hybrid library to reach out to the world is commendable. We are not surprised anyway because Chevron has consistently shown great corporate responsibilities,â€ Agba said.