The Situation in Rivers State ahead of the LGA elections on May 23rd, 2015 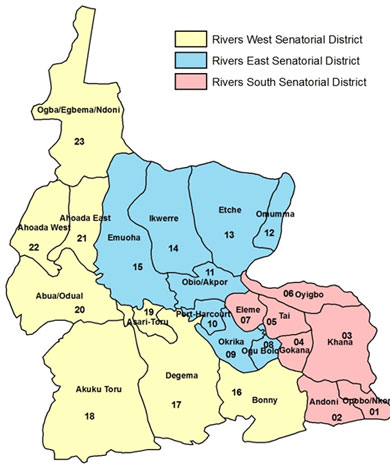 From an early warning point of view the situation in Rivers State is quite troubling. For the benefit of those who arenâ€™t peacebuilding practitioners or scholars, early warning basically involves collecting and analyzing information from conflict impacted areas to anticipate the exacerbation of conflicts, to develop a response mechanism in order to prevent that crisis and to present valuable information to decision makers to guide them in their decision making towards preventing or addressing conflict drivers.

For over two years most people have followed keenly the situation in Rivers State right from when a Federal High Court sitting in Abuja booted the Godspower Ake led PDP executive committee out of office and declared Chief Felix Obuah and others as the validly elected executive committee of the PDP in Rivers State. That singular decision had the effect of an upheaval in the State political landscape and the state has never been the same again. Notable events that occurred from that decision are: purported impeachment of the speaker of the Rivers State House of Assembly by a group of five legislators; the deployment of a new Inspector General of Police to the state; protests by ex-militants against the Governor; and the reported clamp down of supporters of the APC in the state. When the Governor finally decamped to the APC, the stage was set for a keenly and fiercely contested election between the APC, headed by Governor Amaechi, and his political rival Chief Ezebunwo Nyesom Wike, for PDP.

In fact the weeks and months leading up to the elections was laden with violent conflicts involving supporters of both parties. Campaigns were hard fought and oftentimes violent, there was reported bombing of opposition party secretariats, ambushing of party supporters on their way to political rallies, kidnappings and disruption of rallies. These incidents set the tone for what was to be a fiercely contested election in the state since 1999, the outcome of which the state hasnâ€™t recovered.

Against this backdrop, when the Chairman of the Rivers State Independent Electoral Commission (RSIEC) in April 2015 announced the intention of the commission to hold Local Government elections on the 23rd of May 2015, it was only common for alarm bells to start ringing, especially after the PDP contested the validity of that action.

Ordinarily, the RSIEC is statutorily empowered under the Rivers state Independent electoral law No 2, 2001 and State Local Government Law No 3, 1999 to hold elections into local government offices, thereâ€™s no disputing that. However from an early warning point of view, insistence on statutory enabled rights without regard to the context could lead to possible outbreak of violence; taking into cognizance that the primary actors in the last state election (which was the subject of much controversy and source of tension) are still the same actors in this instance. More so, in this instance where there is a strong contention against conducting the elections. It is against this backdrop that PIND Foundation has developed the following scenarios and recommendations.

SCENARIOS
Worst-case scenario:
I. The RSIEC goes ahead to conduct the LG elections on May 23 and the elections are marred by violence between the leading political parties in the state resulting in the loss of lives and property in the state. (Very Likely)

II. The elections are conducted as proposed by RSIEC and the government deploys security agents to crush every form of opposition from rival political parties. This results in a face-off between security agents and supporters of opposition parties leading to arrests and loss of lives. (Likely)

I. The PDP boycotts the Local Government (LG) elections on May 23; after the handover to PDP government on May 29, the Governor with the aid of the State House of Assembly dissolves the council. The LG council bosses are aggrieved and seek redress in court. (Very Likely)

II. In addition to dissolving the councils, the new Governor appoints his own Caretaker committee Chairmen at the local government level and funds them with money from the State/LG joint account. As a result there is a situation where there are parallel LG administrations in all 23 LG councils in the state. These results in violent clashes between the supporters of the competing administrations and the LG council offices are blocked by the security forces pending resolution of the matters. This consequence is that LG administration is suspended in the state by the security agencies and development in the councils grinds to a halt. (Very Likely)

III. The court following a recent case decided by the Supreme Court rules in favour of the Council Chairmen but the government openly refuses to obey the court order resulting in heightened tension within the state. (Likely)

IV. The elections are held, the APC records a resounding victory and the Council Chairmen are sworn in before the expiration of the APC administration in the State. A new PDP government is sworn in on May 29, and the State Governor decides to starve the Council of Funds by refusing to allocate LG funds in the Joint account to them. A fresh barrage of court cases are instituted by aggrieved LG councils further slowing down LG administration until the cases are determined.

Best-case Scenario
I. Taking into consideration the tension within the state, the RSIEC refrains from conducting the LG elections; opting instead to leave it to the next administration to conduct. (Very unlikely)

II. The elections hold peacefully, those that lost out in the election use the courts to ventilate their grievances and the new PDP administration elects to work with the newly elected LG council chairmen (Very Unlikely)

I. The Rivers State government should take into cognizance the current dynamics in the state and refrain from holding the Local Government elections until tension in the state have reduced. While the RSIEC is statutorily empowered to conduct elections, it should note that conducting elections at the detriment of lives and properties isnâ€™t the kind of legacy that the outgoing RSIEC Chairman will want to leave behind.

II. The Ruling APC and opposition PDP should restrain their supporters and in view of the heated tension in the state should ensure that they ventilate their grievances in the courts of law.

III. The Outgoing Rivers State administration should do all within its powers to resolve the current judicial crisis in the state. As long as the courts are closed, people will always adopt a less constructive way to resolve conflicts or ventilate their grievances.

IV. In the face of heightened tension in the state since 2013 and the taking into cognizance the roles the Police played in exacerbating such tensions; this is the time for the Police hierarchy in the state to start on a clean slate and ensure that they maintain peace and order in the state without being partisan. Should the RSIEC insist on holding the elections, the police should be very vigilant to protect lives and safe guard properties in the state.