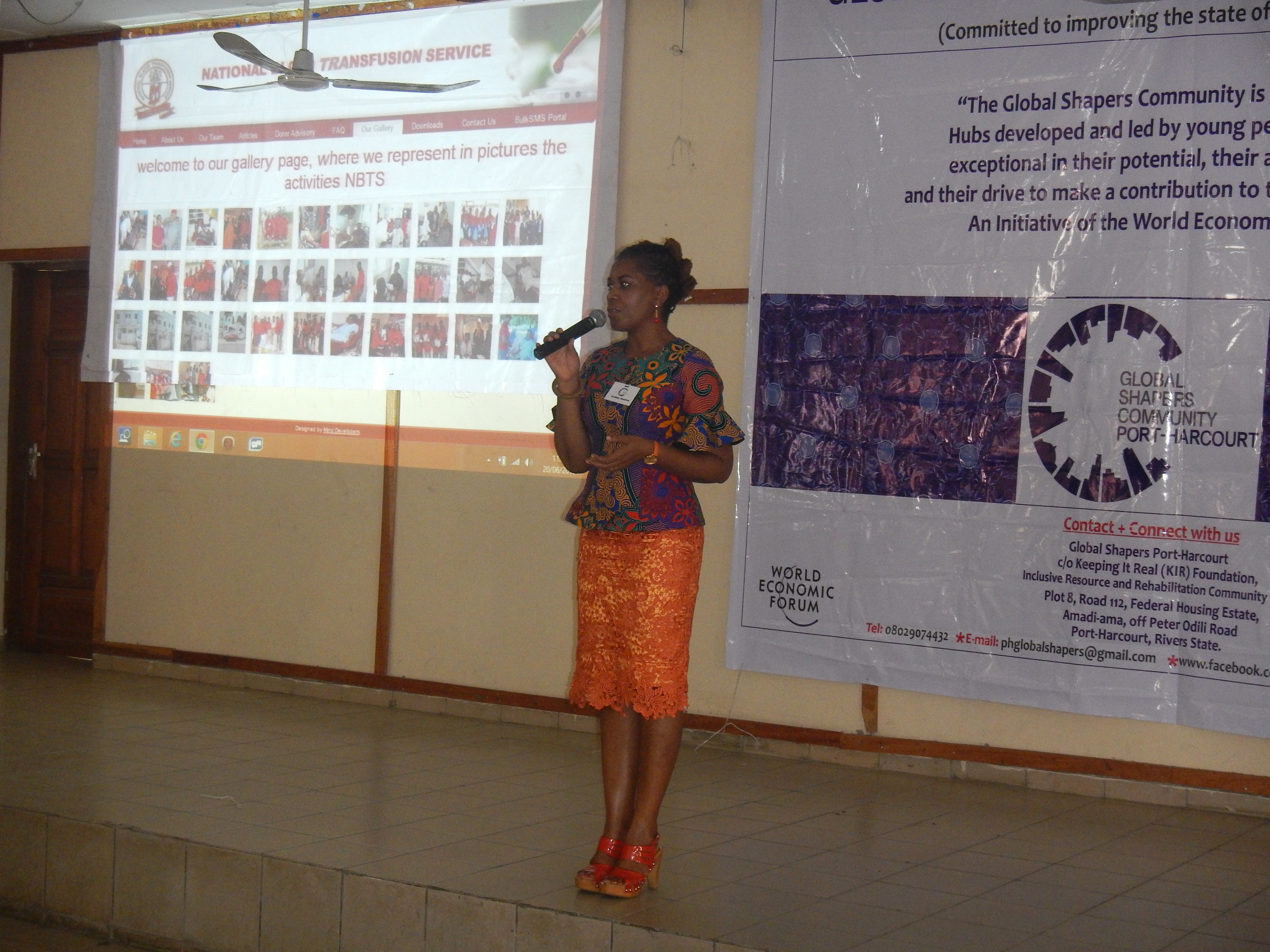 The Global Shapers Community (GSC) is a network of hubs founded and led by young people who are exceptional in their potential, their achievements and their drive to make a contribution to their communities. The GSC is a constituent of the World Economic Forum.

The campaign aims to encourage regular blood donors in Rivers State and beyond to continue giving blood and people in good health who have never given blood, particularly young people, to begin doing so. The â€œSave a Life, Become a Blood Donorâ€™ Campaign which was organized by the Port Harcourt Global Shapers Hub with support from AIESEC and JCI chapters of University of Port Harcourt held at the International Students Centre, University of Port Harcourt.

The event started on time at exactly 10am with the National Anthem, the Pledge, opening remarks by Bitebo Gogo the Founding Curator of the Port Harcourt Hub and short videos. The first speaker was Mr Jude Omamegbe, a replacement blood donor and a graduate of Human Physiology from University of Port Harcourt. He told the audience that blood donation matters because when he was an undergraduate, a woman died in his presence as a result of shortage of blood to transfuse her during a surgery and because she did not have timely access to a replacement donor.

Mr Jude encouraged attendees at the event to make a commitment to give blood often and freely. He encouraged prospective donors to maintain a healthy diet, and to keep fit, so that they will always be in good physical form to donate blood at least four times a year. In conclusion, he informed the audience that a pint of blood can save the lives of three people.

Also, Mr Izoma Godwin a trainer from the Nigeria Red Cross Society, Rivers State branch facilitated at the event. He motivated the attendees to become regular blood donors. During his presentation he said; â€œthe blood you donate today, might save a life tomorrowâ€¦ and who knows it might just be your own life.â€

Although, the event was not a blood collection drive, it was intended to sensitize and register young blood donors who will be willing to donate blood frequently in order to ensure adequate supply of blood in Rivers State. 75% of blood donors in Nigeria are paid to donate blood, while 25% are unpaid replacement donors who are family members, friends or someone connected to the recipient. However, voluntary donors (unpaid) are very few. The seminar was attended by students from and University of Port Harcourt. One of the attendees; Maclarry Ebere said, â€œThank you very much Port Harcourt Global Shapers for changing my perception about donating bloodâ€.

Bitebo Gogo, the founding Curator of the Global Shapers Community in Port Harcourt stated that the campaign will continue, via social media and one-on-one interaction, to increase the number of unpaid blood donors especially replacement donors in Rivers State. The Hub will work in partnership with Red Cross and the National Blood Transfusion Service at the Military Hospital, Aba Road, Port Harcourt. Bitebo Gogo in her closing remarks also informed attendees at the seminar that the mission of the Port Harcourt Hub is to shape Port Harcourt in the area of citizenship engagement and to raise young volunteers that will improve the state of Port Harcourt.