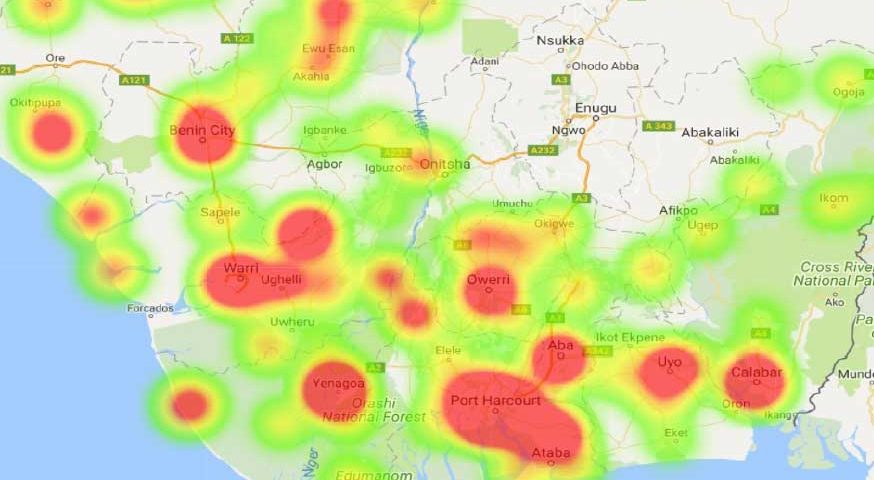 Abia State was created out of the old Imo State in 1991 under the then military administration. The State is located in the South East region of Nigeria and comprises of 17 local government areas. It occupies about 6,320 kilometers and is bordered by the states of Enugu and Ebonyi to the north, Akwa Ibom to the east and southeast, Rivers to the south and southwest, and Imo and Anambra to the west.[1] The State has a population of about 2.4 million people.[2]

Communal tensions, ethnic nationalist sentiments, and land disputes continue to be a persistent feature of the conflict landscape in Abia State. According to a report by the Foundation for Partnership Initiatives in the Niger Delta (PIND), there was an increase in reported incidents of conﬂict risk and violence in Abia state in from April to June 2020, compared to January to March 2020. Abia was among the least violent States in the Niger Delta during the period, based on reported fatalities. Ikwuano and Aba North LGAs had the highest levels of lethal violence in the state during the quarter. Conﬂict risk and violence during the period were mainly driven by criminality, communal conﬂict, and extra-judicial killings by security operatives[4].

The current response to Conflict and Insecurity

Currently, the approach adopted by States towards addressing insecurity is to focus wholly on a public security approach without resources to a human security approach. While this approach could be effective in the short term, it robs the States of the long term gains of focusing on more holistic and inclusive means of conflict management.

Any effective security approach must be a holistic one that confronts insecurity from both public security and a peacebuilding perspective. A public security approach would involve the actions of government and security actors such as the police and military as is currently practiced by most State governments in the Niger Delta. A peacebuilding approach would focus on the drivers of conflict and identifying proactive measures that look at conflict prevention as well as reduction and mitigation.

Focus on Conflict Prevention rather than mitigation

Conflict is not always linear or able to be divided into discrete phases or timelines, nor is it always contained to easily-delineated geographical designations. Considering the dynamic nature of the conflict, a segmented or inflexible approach cannot effectively address the varied drivers, triggers, vulnerability, and risk factors of a particular conflict system. Therefore, effective prevention, as well as proactive conflict management and resolution, must be informed by an equally dynamic and integrated early warning system. Such a system should include state and non-state actors as part of a systematic and multifaceted process of data collection, information sharing, and verification.[5] All too often, this is not the case and key stakeholders who may have both the necessary information and skills to anticipate and respond to a conflict before it escalates into a crisis, are left out of the process.

For effectiveness in security in Abia State, there is the need to utilize early warning effectively for conflict prevention. Approaches to establishing peace in the State shouldn’t be wholly focused on a public security approach similar to the approach currently in place and which has had limited or no success in the various States in the Country. There needs to be a complementary approach that emphasizes conflict prevention through the use of early warning and early response and peacebuilding. Such an approach also needs to be participatory and inclusive, employing the civil society organizations and other non-security actors to complement the efforts of security agencies. Conflict prevention involves a whole spectrum of activities that include peace education, sensitization, and awareness on issues, etc., all these are activities that CSOs and other non-security actors can engage in.

Creating a roadmap to sustainable peace: The establishment of the State peacebuilding commission

The approach adopted by successive administrations to the incessant outbreak of violent conflict has been limited to the setting up of commissions of inquiry and the deployment of security agents during, and or in the immediate aftermath of conflict. This strategy often fails to address violence at its root. Deeply entrenched grievances and suspicion that drive conflict must be reversed.  There is a need to shift focus from the reactionary pattern of response to the violent conflict to being proactive. Rather than responding to the outbreak of violent conflict, the primary goal should be to prevent them from flaring up and escalating. The establishment of a road map to peace and the creation of a state peacebuilding commission are some of the ways to achieve this objective.

A peacebuilding roadmap or framework is a document that outlines multiple opportunities to advance conflict prevention and peacebuilding objectives in the State. It highlights some of the pathways that can help propel the Peace process forward. Leveraging on the capacity of various actors and the Peacebuilding Commission, it will promote sustainable conflict-sensitive planning, implementation, monitoring, and evaluation as well as mainstream the role of women in all post-conflict intervention processes. The peacebuilding roadmap and framework sets out the State’s direction and ambitions over a medium-term period and provides metrics for the measurement of success and progress over short and medium-term periods.

Developing a peacebuilding roadmap or framework

A State peacebuilding commission is a government agency established to drive conflict resolution efforts in the State. The commission is primarily responsible for driving the implementation of the peacebuilding roadmap or framework. The Commission embodies the needed neutrality to deploy multi-stakeholder approaches to conflict resolution and peacebuilding, a task which security agencies are ill-equipped for and which civil society organizations often lack the necessary government backing to accomplish.

Furthermore, a state peacebuilding commission can act as a clearinghouse for civil society actors working on conflict issues in the state and can provide government support and organization necessary for peace and security actors to share information and plans for enhanced coordination and cooperation in addressing conflict issues in the State. The State peacebuilding commission plays a key role in Peace Education, Capacity Building, Post Conflict Rehabilitation, Research, Coordination, and Grassroots Mobilizations.

For sustainability, institutional support, and credibility, the State peacebuilding commission should be a creation of law, backed by the legislation of the State House of Assembly.

Proposed Objectives of the Peace Commission

Proposed functions of the Commission

Proposed Powers of the Commission

Proposed Composition of the Commission