IPDU Thematic Report on Human Trafficking in the Niger Delta

Youth – The Mitochondria of every Nation 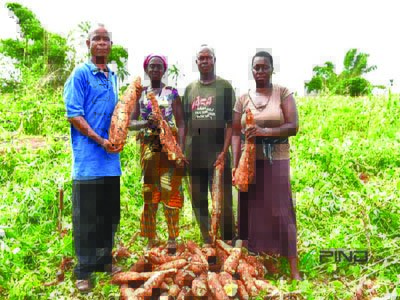 Diyen Friday’s life changed six years ago when he met the Foundation for Partnership Initiatives in the Niger Delta (PIND). After undergoing two-week training held at the PIND’s Economic Development Centre in Egbokodo, Warri, Delta State he acquired skills as an Aquaculture Service Provider (ASP) — a vocation he initially knew nothing about.

By teaching fish farmers in the region on best practices and latest techniques, his earnings have soared, he is able to buy more properties, and he has become better positioned to train his children and feed his extended family.

“My co-farmers were now seeking my advice because of the techniques and some other things we put in place that was not normal with what we were practising before. I became a kind of assistant. I discovered that when I bring a solution to a problem, somebody will start paying me N2, 000, N3, 000. That was how I discovered I can make money from it, as well as through many other workshops.”

“Many times, PIND will organize workshops and these fish feed companies will come,” Friday recalls. “From there, we knew ourselves and started relating. That is where the relationship started from. They will give feed to us, we demonstrate and they give us about 50% of whatever we do’’.

The unique and sustainable approach of PIND has not only led to wealth creation in the Niger Delta through introducing people like Friday to new means of generating income, it has also assisted farmers and small businesses to scale up their business through knowledge sharing, various levels of collaboration and access to markets.

Esonde Bakare, a mother of three, is the owner of IceQueen Food and Beverages, a major toilet tissue distributing company in Warri, Delta State. This, however, became her story only after her encounter with PIND. Bakare was a small-time retailer with her shop “at the back of the market” before she was referred to Ayodele Bamidele, a PIND-trained business service provider (BSP).

Through Bamidele’s guidance, she standardised her record-keeping and account book-keeping methods. This ensured not only that she blocked leakages but also made her eligible for a N16 million grant that turned things around for her business. She got a perfect office location, Toyota Hiace distribution van, an accounting software as well as life and vehicle insurance.

“This new place can take three trucks of 4,000 bundles of tissue conveniently and that is the capacity we wanted to be at with the injection of these funds. They call my place the beautiful tissue house,” Bakare says. Now she hopes to give back to society by empowering young people and taking them permanently off the streets.

There are numerous other success stories spread across the nine states of Niger Delta with credit going to human capacity and peace-building models pioneered by PIND — from Veronica Njoku alongside her peers who are able to upgrade from subsistence to commercial farming to the restoration of peace to Delta’s Igbidi and Okpolo-Enweh communities after a bloody, fifty-year-old boundary dispute.

Having struck gold with its newfound innovative methods, PIND decided to share them with other stakeholders at the just-concluded 24th Nigerian Economic Summit held at Transcorp Hilton Hotel, Abuja. The session had in attendance key players from government, private sector, and civil society. It is indeed a two-hour period of brainstorming and eye-opening revelations.

While giving an insight on how the model works, Dr Dara Akala, the organisation’s Executive Director, explains that it essentially involves three processes: understanding the issues through a pre-intervention assessment, finding partners with similar interests to work with, especially in the private sector, and empowering people with relevant knowledge and skills, ensuring to guide them in the post-training period.

“It is evidence-driven, not a one-off process that requires time. It is systemic rather than piecemeal and is a bouquet of mutually supporting interventions,” he clarifies.

“Our unique approach ensures that economic gains occur in a systemic and an inclusive manner, which advances the population, especially youth and women and prevent a workforce and civil society that continues to experience joblessness and fails to advance aims targeted at strengthening institutions and tackling poverty.”

During the event’s panel discussion, Bose Eitokpah, PIND’s Capacity Building Program Manager, informs the audience that the Foundation’s model, which is either called the Market Systems Approach or M4P (Making Market Work for the Poor), is better than other direct, short-term models because it is sustainable and efficient.

“Our capacity building objective is to increase the capacity of communities, civil society organisations and institutions in order to achieve socio-economic growth and community prosperity,” she explains.

“We develop modules that are mutually reinforcing for example of financial management, proposal development, ICT and social media, and so on. We monitored our progress, held trainings and helped organisations with resource mobilisation.

”In addition to this, we realised we needed coaches and mentors to help them apply some of the acquired skills effectively. We realised also that we needed to provide some grants and equipment support so that we may all achieve our objectives. So, as I said, it is total package.”

Furthermore, one of the panellists, Mr. Emeka Ile, who is the Project Manager of the Youth Empowerment pathways Project for The Niger Delta (NDYEP), alluded that youth unemployment can be curbed through holistic measures to PIND’s innovative approach on systemic human capacity development and wealth creation, citing agriculture, construction and ICT as some of the ways in bringing about job creation and sustainable development to the Niger Delta.

Also on the panel was James Elekwachi, PIND’s Market Development Projects Manager. According to him, the Foundation’s model involves identifying and working with sectors that have growth potentials and are highly scalable. Partners are considered, he says, based on level of willingness, commercial interest and then skills, which is measured using organisational capacity assessment.

Responding to a question from the audience, Elekwachi provides sector by sector figures to underscore the effectiveness of the Foundation’s unique approach.

“In aquaculture for example, the market is about 4 million metric tonnes,” he notes. “When we started our intervention to improve the efficiency of agricultural production, we found that average profit was about five percent. When we completed the demonstration with them, average profit moved to about 22 percent.”

In his contribution to the conversation, Tunji Idowu, Deputy Executive Director at PIND, says many stakeholders stick to old models sometimes because of a sheer unwillingness to change, scepticism, or due to the lack of technical know-how.

“In the development world, there are various approaches that people use,” he observes. “Perhaps more popular would be the direct interventionist approach. More folks are using that. They may get you seemingly quicker results, but they are not sustainable in the long term, especially once the interventionist exits.”

He adds: “Our own approach is still relatively new in the development space but more and more people are adopting it because, though it takes time, the results are more sustainable. For us as a Foundation, we have to continue creating awareness about this approach and make sure we can recommend it to other players.”

Towards the end of his closing statement, the Deputy Executive Director remarks that PIND’s approach is not only guaranteed to work in the Niger Delta region but can be applied effectively elsewhere. “It is a journey,” he continues. “It is a process. It takes time. We know we are making progress but we also admit that there is a lot still to be done.”

As various groups represented at the session, including Amnesty International and the National Budget Office, commit to study PIND’s unique model and partner with the Foundation to replicate it in their activities, it is clear that Nigeria has just taken a great leap in the direction of peace-building, human development and economic prosperity. Lessons from the Niger Delta can finally lay a solid foundation for improved standards of living in all of the country’s regions.