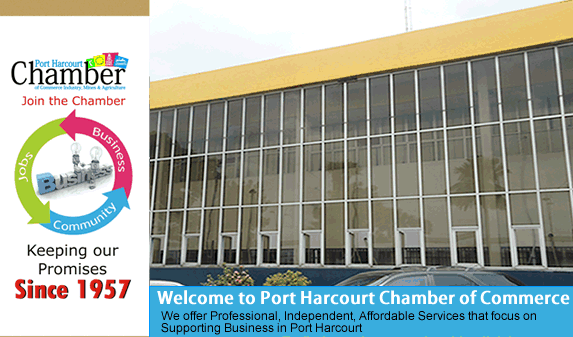 Much of this was made known during the visit of Grofin Management team led by its Senior Investment Manager Rivers state office, Mr Friday Essienenkak during a courtesy call on PHCCIMA President, Engr. Emeka Unachukwu, at the chamberâ€™s office in Port Harcourt.

Speaking during the visit, Mr. Essienenkak in company of his Credit/investment Manager Charles Chikezie said the call has become necessary to appreciate the President and the chamber for making available a platform for Grofin to provide financial support to small and medium scale enterprises, (SMEâ€™s) in Rivers state and the Niger delta region. According to him the visit was also an opportunity for his team to present a report on the achievements of the PHCCIMA/C â€˜Growing Business Initiativeâ€™ (PCS3).

Outlining some of the accomplishments recorded in the outgoing year, Essienenkak disclosed that out of 13 loan applications submitted by members, five have been successfully approved and disbursed totaling the sum of N48 million. Presently he explained that six other applicants are in the processing stage, while two were rejected for not satisfying the criteria for approval.

The Grofin helmsman said he is delighted that the PHCCIMA/Grofin partnership enabled the companyâ€™s operations in the Niger Delta to take off successfully last year, adding that due to the success recorded the headquarters of Grofin fund in South Africa has granted the request for reduction of the interest rate to 12% per annum from the previous 18% charged.

Though he admitted some very low points last year saying consistent low application by valued members affected the overall expected target for the area. He expressed optimism that this year will be better.

Speaking about projections for 2015, Mr. Friday Essienenkak explained that expectations are that about 50 PHCCIMA members should benefit from the small and large funds already available for approval and disbursements to qualified applicants.

In his parting words he requested for continued support from the chamber to reach out to more of its members even as he stressed that Grofin is willing and ready to explore the eight remaining states in the Niger delta region this year.

President of PHCCIMA, Engr Emeka Unachukwu in his remark thanked the Grofin management team for successfully implementing the partnership agreement with PHCCIMA Credit Support Scheme for SMEâ€™S (PCS3) otherwise called the â€˜Growing Business Initiativeâ€™. He said the partnership with Grofin aimed at providing collateral free and low interest loan facility for the growth and development of its members have been a huge success in its first year.

According to him the initiative has accorded PHCCIMA an international recognition in the comity of chambers and guaranteed her a spot at the World Chamber of Commerce competition coming up this year in Italy; first of its kind in the history of Nigeria.

The PHCCIMA boss assured the team that loans so far approved and disbursed, and those awaiting disbursement in the future shall be properly utilized and monitored by the chamber to ensure they are repaid promptly.

He said the chamber will continue to provide support, advantage, welfare and remedy for SMEâ€™s fundamental funding challenges.

Unachukwu used the opportunity to urge PHCCIMA members to take advantage of the very rare opportunity for company expansion and access to working capital.