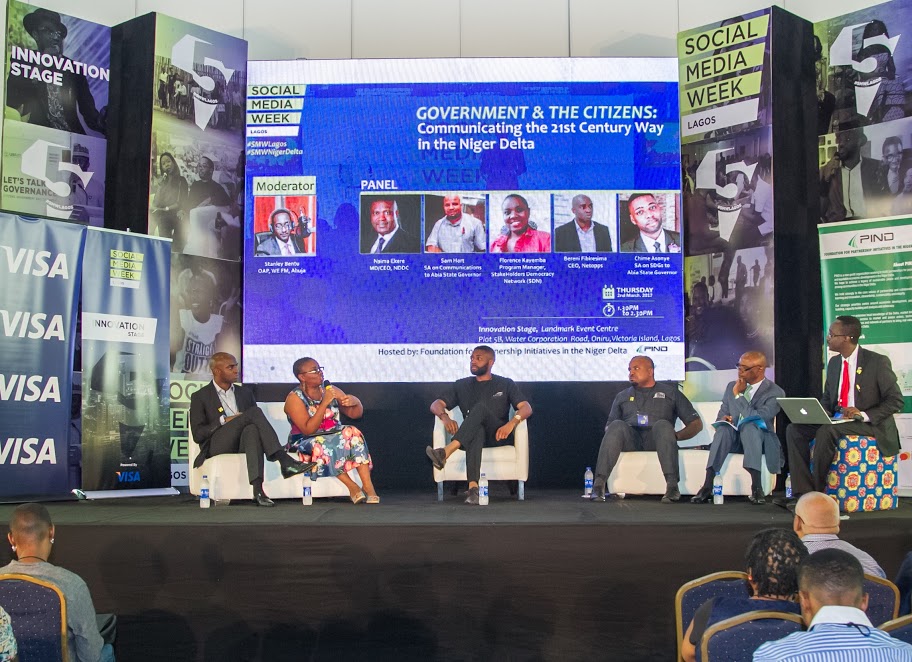 Experts have stressed the need for better communication channels between the government and the citizens of the Niger Delta to drive development in the region.

At a panel session held on March 3 as part of the 2017 edition of the Social Media Week in Lagos, panelists were unanimous on the need for Niger Delta Government to adopt technology as a means of enhancing communication with the citizens, while also calling for an urgent need to bridge the gap between the government and the citizens in the Niger Delta.

The panel session titled â€˜Government and the Citizens, Communicating the 21st Century Way in the Niger Deltaâ€™ was organized by the Foundation for Partnership Initiatives in the Niger Delta (PIND) and had the Managing Director and Chief Executive Officer of the Niger Delta Development Corporation (NDDC), Mr Nsima Ekere who was represented by his Technical Adviser on Partnerships and Development, Mr John Akpan. Other panelists at the session were Sam Hart, Special Adviser on Communications to the Governor of Abia State; Florence Kayemba, Program Director of the Stakeholders Democracy Network (SDN); Bereni Fibiresima, CEO of Netopps and; Chime Asonye, Special Assistant on SDGs to the Governor of Abia State.

Speaking on the role of government in communicating feedback to the citizens, Mr Ekere said social Â media Â has Â played Â a Â huge Â role Â in Â opening Â up Â space Â for Â discussion between the government and the citizens of the Niger Delta. On the role of NDDC in improving communication with citizens, Ekere said â€˜â€™the newly inaugurated governorship board of the commission is determined to improve openness and transparency in its processesâ€™â€™. He stressed the refocu on the 4Rs of the commission which are to restructureÂ the balance sheet which currently has aboutÂ N1.2 trillion worth of on-going projects; reformÂ the governance systems to ensure the organization complies with extant rules and regulations; restoreÂ the core mandate of the Commission by ensuring there is a Â properly prepared set ofÂ master plansÂ for the 9 States and; reaffirmÂ the commitment to doing whatâ€™s right and proper.

Florence Kayemba, Program Director of the Stakeholders Democracy Network (SDN) said the Niger Delta is not a homogenous region as every region has its peculiarities, therefore the Niger Delta should not be seen as a region of violence and crime, but rather a region of enormous resources and potentials. According to her, the government should create a system where citizens are able to provide feedback to the government. â€œIncreasing citizens participation in the Niger Delta is the key to changeâ€ she said.

Sam Hart who is the Special Adviser on Communications to the Governor of Abia State said a lot is being done to improve technology and citizens engagement in his state, citing an example of the e-library which also serves as a tech hub recently commissioned by the State Governor as well as a citizens call center set up to allow a proper feedback mechanism with the citizens of the state. According to him, the Abia state government will be hosting events to select outstanding tech startups in the state. Speaking on Open Budgeting by the Niger Delta states, Hart said â€œI support open budgeting by Niger Delta state governments. It is not easy, but it has to be doneâ€. He also reiterated the need for Niger Delta state Governments to embrace social media in communicating with their citizens. â€œAny government not on Social Media is doing itself a disserviceâ€ he said.

Also lending his voice to the discussion, Chime Asonye, Special Assistant to the Abia State Governor on SDGs said implementation of the Sustainable Development Goals (SDGs) in the Niger Delta states has been poor so there is therefore a need to focus more on the SDGs. According to him, the SDGs provide a proper channel for sustainable development in the Niger Delta. On openness by the government, Chime said there is a need for a system where citizens can give feedback and receive responses from the government, citing an example of Abia state which has an active social media presence that serves as a feedback mechanism between the government and the citizens. He stressed the need for an evidence based budgeting process which will involve citizensâ€™ participation and an oversight from the legislature.

Putting a perspective of the private sector and technology to the discussion, Bereni Fibiresima, CEO of Netopps concept said there is a need to improve technology adoption in the region. The Niger Delta is still struggling with low internet penetration which is affecting the emergence of startups. He charged the government to address the developmental gaps in the region by creating a holistic ICT innovation strategy to support the young people who are marginalized.

Reacting to the panel discussion, some of Â the audience who are majorly from the Niger Delta region were happy that such discussion on Niger Delta development was happening at a national level. Â â€œI am happy that this discussion is happening and wish some of the solutions proffered here will be implementedâ€ a participant said. â€˜â€™I hope to see Niger Delta governors spearhead these kind of discussions in the near futureâ€ the Edo State born participant further added.Â  Another audience bared his mind on the constant labeling of Niger Delta citizens as angry people, saying the narrative must change. He also called for a streamlining of agencies working in the region and the need for the government to invest in startups and tech hubs in the region.

The event was moderated by Stanley Bentu, an On Air Personality at WE FM in Abuja and was attended by development practitioners, civil society organizations, Â technology entrepreneurs in the region and many Niger Deltans living outside the region. The panel session is part of PINDâ€™s effort to create awareness and increase understanding of relevant stakeholders on systemic constraints and enablers to inclusive equitable economic growth in the Niger Delta region, one of which is more effective communication and collaboration between citizens and government.