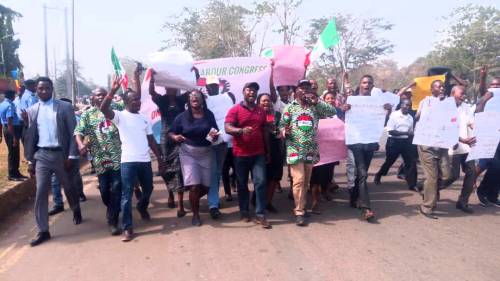 The leaders of the unions converged at the pouplar Adegbemile Cultural Centre in Akure and marched to the Ondo State Governor’s office on Tuesday.

On Monday, the Nigerian government’s meeting with the union leaders ended in a deadlock.

Speaking during the demonstration, Ayuba Wabba, the NLC President, demanded to know why Presdent Muhammadu Buhari was yet to implement the new minimum wage of N30,000.

Represented by Yemisi Bamgbose, an erswhile national president of the Radio, Television and Theatre Workers Union (RATTAWU), Wabba stressed that the demostrations were not politically motivated, but geared towards committing the president to take immediate action on the matter.

The letter addresed to Rotimi Akeredolu, Governor of Ondo State, was also presented during the protest.

The letter read: “Your Excellency will recall the Tripartite Committee on the National Minimum Wage, comprising the government, organised private sector and organised labour has concluded its work and submitted the report with a draft bill to President Muhammadu Buhari on 6th November, 2018. It is also noteworthy that six governors were members of the committee that worked out the new national minimum wage. Therefore, it stands to reason that the report and draft bill were the collective efforts of the broadest spectrum of all concerned parties and should thus commend the support of every governor.

“Nigerian workers as voters will indeed take their eventual fate to the polling stations and indicate in the ballot their views on the faithful implementation of new minimum wage by the executive before the polls. Nigerian workers and families will not — and cause friends and allies not to — vote for any candidate in the forthcoming elections, who hesitate or refuse to commit to the national minimum wage.

“For the avoidance of any iota of doubt, the fate of the new national minimum wage will largely determine the electoral preference of Nigerian workers in 2019.”

Ifedayo Abegunde, the Secretary to the Ondo State Government (SSG) who received the letter, said the state would look into the demand and ensure it is related to the Nigerian government.

Abegunde, however, maintained that the welfare of Ondo workers was paramount to the state government.