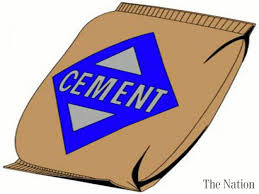 The Federal Government has said that owing to its Backward Integration Policy, the country now has an installed capacity of 39.5 million metric tons of cement production. This was made known by President Goodluck Jonathan on Tuesday at the Line II Ground-Breaking ceremony of UNICEMÂ Cement Factory, Mfamosing, Calabar, Cross River State.

The President who was represented by Vice President Namadi Sambo, noted that the Backward Integration Policy in the cement industry was initiated by the Federal Government in 2002 to meet self-sufficiency in cement production. He said “From a paltry 2 million metric tonnes of cement hitherto produced locally per annum, by 2013 we have achieved 39.5 million metric tons of installed capacity.”

The President described the manufacturing industry as the backbone of the country’s growth emphasizing that government would continue to formulate policies that would galvanize the industry. According to the President to tackle the challenges being faced by industries in Cross River State, the 550mw Calabar Power plant would soon be commissioned, adding that construction work would soon commence on the rail line leading to Calabar up to Obudu Ranch, while also the dredging of the Calabar River as well as the construction of a deep sea port at Ibaka among other infrastructural development were on top gear. He therefore enjoined cooperation among all stakeholders as this was necessary for progress, saying “Government will continue to cooperate with the relevant agencies both public and private to champion meaningful projects and ensure steady progress in our communities.”

President Jonathan while commending the management of UNICEM for keying into the Transformation Agenda, stressed the need to carry along the communities in the area of its operations, saying “improving the lives of the people in these communities remains your greatest’ business asset.”

Speaking to the communities within UNICEMâ€™s operation area the President also urged them to cooperate with the company, stressing that “This is the only way the new project could be realized in record time, by 2016, and the surrounding communities will derive the full benefits of the project.”

In his remarks the Governor of Cross River State, represented by his Deputy, Barrister Efiok Cobham, said the State government would continue to provide the enabling environment for businesses to thrive. He commended the President for his people friendly policies that had made the State a hub of industrialization. He added that the increased capacity would not only reduce the supply gap but would also reduce the market price of cement in the State.

Earlier the Minister of Industry, Trade and Investment, speaking through the Minister of State,Â Samuel Ortom, said the performance of the cement industry was a testimony that Nigeria was moving in the right direction in achieving her Industrial Revolution plan.

The Chairman of UNICEM board, John Coumantaros, said the new line which would cost the company N84 billionÂ  would be completed in 2016 and would increase the capacity of the company from the current 2.5 million metric tons to 5 million metric tons, adding that when it comes on stream it would also provide jobs both directly and indirectly. He urged government to tackle multiple taxation, provide the necessary infrastructure in the power, and transport sectors, especially roads, water and rail.

The event was graced by the Minister of Culture and Tourism, Chief Edem Duke, members of the state executive council and legislature, as well as other industry players and stakeholders.

In a related development Vice President Sambo as part of the visit to Cross River State, inspected the soon to be commissioned 550mw Power Plant in Calabar and expressed satisfaction with all aspect of the plant.