New Army division to be established in Niger Delta

Impact of projects in the Niger Delta 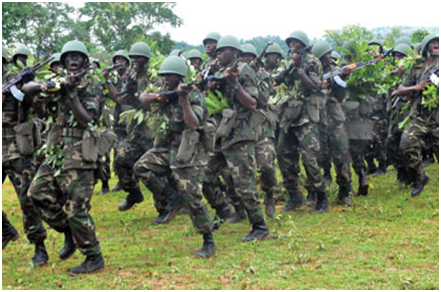 There are strong indications that the Niger Delta region of the country will soon have a division of the Nigerian Army whose primary responsibility will be to safeguard the nationâ€™s economic and territorial assets, vanquish terrorism and contain future threats to the nationâ€™s boundaries with Cameroon and other countries in the Gulf of Guinea area.

This new division, with possible headquarters in Port Harcourt, will be similar to the 7th Division of the Nigerian Army in Maiduguri which was set up to curb terrorist activities and cross-border crimes.

The idea of setting up a 9,000 strong division for the oil-rich area was conceived due to intelligence reports that unpatriotic elements are mobilizing a new group of militant youths to destabilize the peace of the region. According to sources, this novel idea was suggested by the Chief of Army Staff, Lt. General Azubuike Ihejirika and is reported to have the backing of Service Chiefs including Vice Admiral Dele Ezeoba; Chief of Air Staff, Air Marshal Alex Badeh; Inspector General of Police, Mohammed Abubakar and the DG of Department of State Services.

If this idea materializes, the new division will not only balance the equation of existing army divisions (in Lagos, Ibadan, Kaduna, Enugu, Jos and Maiduguri) but would give the Niger Delta region a much needed military presence and possibly replace â€˜temporaryâ€™ arrangements currently operating in the region like the Special Task Force for the Niger Delta and â€˜Operation Pulo Shieldâ€™.