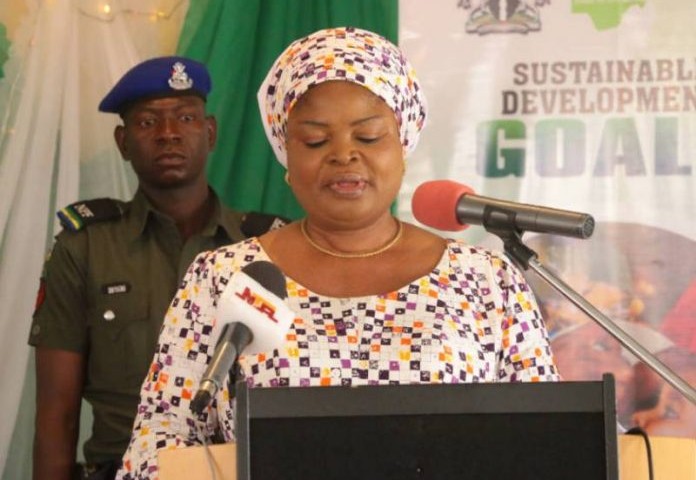 In a bid to stem the tide of various abuses, including domestic violence and infringement of the rights of vulnerable in the society, the Office of the Senior Special Assistant to the President on Sustainable Development Goals (OSSAP-SDGs) has launched a war against unscrupulous violators in a strategic partnership with the Nigerian Bar Association (NBA).

The Senior Special Assistant to the President on SDGs, Princess Adejoke Orelope-Adefulire, made this revelation while handing over operational buses to the President of the NBA, Mr. Abubakar Mahmoud (SAN), in Abuja.

A statement issued by Media Assistant to the Senior Special Assistant to the President on SDGs, (SSAP-SDGs), Desmond Utomwen, stated that the provision of the buses was in fulfilment of part of the MoU signed between the OSSAP-SDGs and the NBA on October 19, 2017, with the objective to enhance the realisation of goal 16 of the SDGs by facilitating access to justice among vulnerable groups in the country as well as reduce the spate of conflict and violence in our society.

ALSO READ: Opinion: if we will achieve sustainable development this year, then education needs to be top priority

According to the SSAP-SDGs, the collaboration is also aimed at bridging the inequality gap, facilitating capacity building among stakeholders and encouraging the establishment of mediation and conciliation centre at the various levels of the society.

“Owing to OSSAP-SDGs commitment towards the accomplishment of the said objectives, I pledged to provide two buses to facilitate and promote access to justice by indigent and vulnerable groups in Nigeria.

“We are passionately resolved and committed to seeing that there is equal access to justice, particularly among the poor and the vulnerable in our society.

“It is in fulfilment of this mission that OSSAP-SDGs is giving its full support to the NBA to render pro bono service nationwide and with this, we may arraign justice for all,” she said.

In the view of the SSAP-SDGs, the issue of human rights is well captured in the Social, Economic and Political Goals, particularly Goal 16, which seeks to promote peaceful and inclusive societies for sustainable development, provide access to justice for all and build effective, accountable and inclusive institutions at all levels. Some of the targets under Goal 16 seek to significantly reduce all forms of violence and related death everywhere; end human rights abuse, exploitation, human trafficking and all other forms of violence against women and torture of children. The collaboration, vis-a-vis the signing of the MOU, is therefore in response to the issues raised in the provision.

In his remarks, the President of the NBA, Abubakar Balarabe Mahmood (SAN), who received the buses on behalf of the association, assured them that the NBA would continue to promote and protect the principles of the rule of law and respect for enforcement of human rights of the citizenry. He promised that the logistic supports given to the association by OSSAP-SDGs would be judiciously utilised.

Mahmood stated that the financial and logistics support as well as the provision of the buses would improve the association’s access to all the communities targeted in the programme.

He maintained that the NBA has a wide reach and stands out as the largest profession in the country with about 125 branches and 160,000 members across the country. The association, he said, had over the years provided free legal services to the less privileged who could not afford legal fees, assisted in the ongoing reconstruction of the North-east region ravaged by insurgency and also provided humanitarian assistance to the internally displaced persons (IDPs) in the region.

He disclosed that in no distant time, the NBA would launch an endowment fund to assist its members who are physically challenged as well as lawyers who are victims of assault in the course of discharging their professional responsibilities.