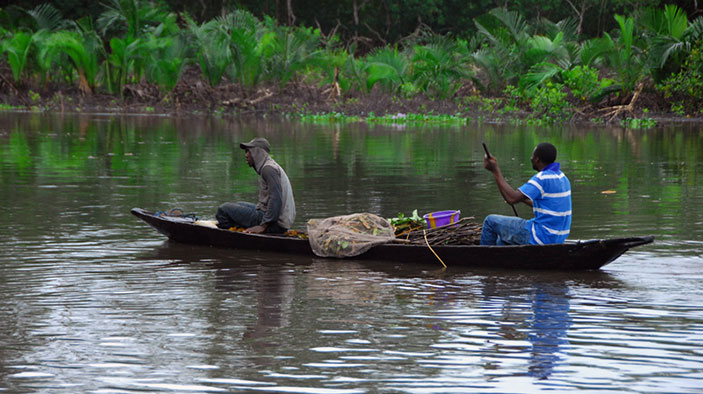 The NNPC/Chevron Joint Venture has devised inclusiveness of the community members as an instrument to curb the agitation in the Niger Delta region and also expand the frontiers of development.

The story is told of MadamÂ  MercyÂ  Olowu, a member of Ikpere Ale- Meje WomenÂ  Traders Association of Ugborodo, whoÂ  could hardly afford to feed her family nor could sheÂ  meet withÂ  the expenses ofÂ  basic essentials like clothing,Â  shelter and theÂ  payment ofÂ  school fees forÂ herÂ children. However, she is no longerÂ  in despair since Chevron Nigeria Limited (CNL), introduced the General Memorandum of Understanding (GMoU),Â  which has not onlyÂ  empowered herÂ but hasÂ  boosted theÂ  developmentÂ  of host communities in the Niger Delta region. The sparkle in herÂ  eyesÂ  and the smile of contentment thatÂ  constantly flashesÂ  on herÂ  face tells theÂ  story of a womanÂ  who not only enjoys theÂ  benefits of belonging to an association,Â  but the joyÂ  and benefit sheÂ  hasÂ  been privileged to get sinceÂ  sheÂ  became aÂ  contractorÂ  to Chevron Nigeria Limited in Delta State.

Today, the story is different; all the projects executed in the communities through a Corporate Social Responsibility based on GMoU pioneered by Chevron Nigeria Limited are now referred to as â€˜community projectsâ€™ and they getÂ  them involved. According to Hon. Stanley Benibo, Chairman, Kula Regional Development Committee (RDC), the projects executed since the advent of the GMoU were â€˜selected by the people, executed by the people and for the people.â€™ This prompted NNPC/ChevronÂ  Joint Venture, recently to organize a GMoU Fair and Exhibition in Abuja to celebrate successes recorded in the implementation of the GMoU and share best practices.

Kula RDC, which is in Rivers State, is one of the eight community-based development organisations known as RDCs or Regional Development Foundation (RDF), which signed the GMoU with Chevron. The other RDCs or FDFs are Itsekiri, Egbema-Gbaramatu (Delta State),Â Idama (Rivers State),Â Keffess, Dodo River (Bayelsa State),Â Ilaje (Ondo State)Â and Jisike (Imo State). The State governments of the RDCs or Foundations are signatories to the GMoU. The NNPC/Chevron Joint Venture signed GMoU with the RDCs and RDFs between 2005 and 2006 in line with its commitment to building partnerships that improve the lives of the people in communities close to its operations and beyond. According to Mr Joe Jakpa, CNL Port Harcourt Area Manager, the GMoU empowers its member-communities to identify and determine their developmental needs using the funds provided by CNL while the government ensures that the governance and control measures which guarantee that approved projects are executed with financial transparency and accountability, are strictly followed.

Governor Emmanuel Uduaghan of Delta State in his remarks,Â  said the results achieved by the GMoU have surpassed the State governmentâ€™s imagination: â€œThe GMoU involving us, NNPC/Chevron and our communities have succeeded beyond our imagination.â€ The governor said that the theme of the GMoU Fair; â€œEnhancing Sustainable Community-Driven Development through Partnership, Transparency and Accountability,â€ was very apt as it would afford all stakeholders, including the government, the opportunity to evaluate and assess the contributions of each of the Regional Development Committees, theÂ  strength and weakness of the GMoU, the development strides in the various communitiesÂ  andÂ  serve as a peer review forum for meaningful and sustainable development of the communities.

Also, Chief Rochas Okorocha of Imo State,Â  said Chevron had done so well for the oil producing communities by pioneering the GMoU.Â  â€œThe communities which belong to the RDCs have enjoyed unprecedented development since the GMoU was introduced and everybody is happy,â€ he said.

A pioneer chairman of Ilaje RDC, MrÂ  Philemon Esbiesuwa,Â  stated that GMoU has transformed and made great things to happen in the communities compared to when the oil companies were dealing directly with the communities, noting that money meant for development was always alleged to have been shared by the community leaders and elders. â€œGMoU is a good policy of promoting peace through dialogue with the communities and stakeholders,â€ he added. The pioneer chairman of Egbema Gbaramatu Central Development Foundation, Dr Ikeh Tolar, said the implementation of the GMoU has translated to improved understanding between the NNPC/Chevron Joint Venture and the communities. â€œThe GMoU process has helped to build a bridge of understanding, trust and commitment to improving the quality of life of the people while also creating an enabling operating environment for Chevronâ€, Dr Tolar stated.

The Chairman/Managing Director of Chevron Nigeria Limited, Mr Andrew Fawthrop while speaking at the event, reiterated Chevronâ€™s commitment to building partnership that resolutely improve the lives of people in the communities it operates, saying it is in line with the companyâ€™s corporate vision to be the global energy company most admired for encouraging participatory partnership among communities, development organizations and government at various levels.

From 2005, when the first GMoU was signed, to 2013 NNPC/Chevron Joint Venture has funded the RDCs with severalÂ billions of Naira. The money was used by the RDCs to execute infrastructure and other projects that were identified in a series of Sustainable Livelihoods Assessments (SLAs) conducted by them. Some of the projects provided by the RDCs, according to statisticsÂ  are skills acquisition and empowerment initiatives, block of flats, town halls, cottage hospitals, jetties and concrete bridges, scholarship and micro credit programmes, guest houses, boats for transport, water facilities and skills acquisition training centre. Others are provision of books, science laboratory and furnished classroom blocks.

The projects, as noted by some of the beneficiaries, have brought remarkable improvement in the socio-economic lives of people living in communities close to Chevronâ€™ operations in Nigeria.


Chevronâ€™s General Manager, Policy, Government & Public Affairs, Deji Haastrup while speaking in the same veinÂ  said: â€œApart from delivering on its core objective of oil and gas production, Chevron – fully supported by its Joint Venture partner, the Nigerian National Petroleum Corporation (NNPC) – is an industry leader resolutely committed to using the GMoU to build partnerships that add significant value to communities where the company operates in line with the vision of being the energy company most admired for its people, partnership and performance.â€ According to him, Chevronâ€™s three primary focus areas for community investments are: improving access to health care needs; enabling education and training opportunities, and promoting sustainable livelihoods. â€œEach element helps contribute to socio-economic progress. Improving the quality of life in communities where we operate requires having access to health care, food, water, housing, sanitation and other basic needs and Chevron leverages its funding, organisational capability, technology and personnel to support the community,â€ he emphasised.