Delta State Emerges Winner of NYG for the Fifth Time 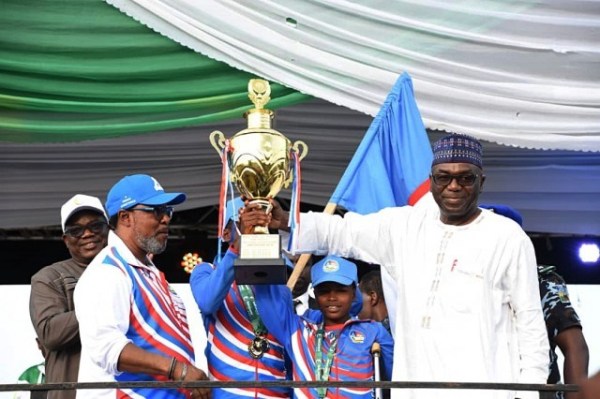 Still basking in the euphoria of a fifth consecutive win at the just-concluded National Youth Games, NYG, held in Ilorin, Kwara State, the Delta State government has also been upbeat about the dividends of its initiative in developing the game of football through its catch-them-young Principals and Headmasters’ Cup competition. Delta State, Monday, September 16, won the 2019 edition of the NYG which debuted in 2013 for a record fifth time, after harvesting a whopping 104 medals comprising 41 gold, 32 silver, and 31 bronze medals.

Team Lagos came a distant second with 72 medals comprising 22 gold, 36  silver, and 14 bronze medals while Bayelsa State came third with 45 medals made up of 17 gold, six silver, and 22 bronze medals. By this scintillating performance, the state had merely confirmed and asserted its supremacy in sports amongst the 36 states in the country having set the record in 2018 of winning the National Sports Festival five times, amassing 163 gold medals, 88 silver, and 101 bronze medals to beat the other participating teams to the number one position at the highly competitive sports meet in Abuja. Rivers  State trailed behind with 69 gold, 58 silver, and 57 bronze medals.

Cheery about the victory, the state governor, Ifeanyi Arthur Okowa, a medical doctor and former senator commended and congratulated Team Delta for making the state proud again and again. In a statement by his chief press secretary, Olisah Ifeajika, the governor noted that the victory did not happen by chance “but by strategic planning and huge investments in sports development”. He said as a multi-ethnic state, “we have identified sports as a unifying factor and it helped us to bring the youths together in a disciplined manner for their own good and that of our state in particular, and Nigeria in general” adding that “as a government, we have continued to devise ways and means to develop and further grow sports, which is evidenced by the revived Headmaster’s and Principal’s Cup competitions and our huge investment in sports development”.

The erstwhile Delta State Principals’ Cup now christened Zenith Bank Delta Principals’ Cup because of the partnership between the bank and the state government, is now into its fourth edition, and is already making waves and achieving the laudable goals for which it was resurrected after several years of being discarded. The success story of the three successive Principals’ Cup competition won by Master Care International School, Asaba, Marvel International School, Ughelli, and Obule International School, Sapele respectively was told Wednesday last week at a press conference by the state basic and secondary education commissioner, Patrick Ukah to herald the opening of the  2019/2020 football competition. Lucky Sunday, the technical adviser to the organizers, told journalists how some members of the winning teams had advanced in their football careers so much so that six of them are no longer in the country. Last edition’s winning school, Obule International School, Sapele, is said to have floated a football academy. On the exploits being done by some of the former players, Sunday said “Obule is just a tip of the iceberg. Let’s go back to the first winners, Master Care. Six of those players are not in this country. There are three of them in Ghana, two in America; one is in London. Denzen Okowa is not in Nigeria today; Frank Louis, the local government chairman’s son is not in Nigeria. They are playing football outside this country. When Master Care International School won the competition, there were fears that they were above the age limit, but these children came with their birth certificates and their international passports are still reading the ages they used in going to that school. So, it shows that in that first edition, we did a good job. Those students from Master Care were under the age limit”. The technical adviser disclosed that it was the same coach who worked with Master Care that coached Obule for the competition. “Obule is now having an academy for those that are still in school this year. Those that are no longer in school, he has given them the scholarship to go to any higher institution of their choice. The players we’ve discovered, they are doing very well; we are monitoring them. We have a pool”.

Opinion: if we will achieve sustainable development this year, then education needs to be top priority

With the kick-off to signal the commencement of the fourth edition of the competition taking place Monday, September 30 at St. Patrick’s College, Asaba, the organizers say they are taking it a notch higher. While the tournament has over the years witnessed an increase in the number of participating schools, Ukah said from over 400 public and private secondary schools in the 2016/2017 edition to over 500 in the 2017/2018 edition, and over 700 in the 2018/2019 edition, nothing short of 1,000 secondary schools are expected in the fourth edition. Winners of each of the editions had smiled home with a cash prize of one million naira. But unlike the first two, the winning school in the last edition had an additional prize of a brand new 18-seater bus donated by the governor. Ukah, however, hinted that there are even more mouth-watering rewards for participants in the current edition. He said the governor, “in consonance with the ‘Finishing Strong’ mantra,
and to adequately position school sports in the state, is committed to sustainably rewarding participating schools. Hence cash awards to every local government area champion at the first level of the competition”. The commissioner posited that this is another veritable way of encouraging grassroots participation in sports.

The sponsor of the tournament, Zenith Bank shared Ukah’s enthusiasm that the current edition would be an improvement on previous editions. DicksonEgede, a representative of the bank, said Zenith Bank is always elated to participate immensely in the development of Nigerian youths by supporting various endeavors across the country, adding that “we are proud of this partnership with the state government and expect all the participants and the facilitators alike to enjoy themselves”. While stating that the bank, therefore, expected a keen contest, Egede who is the manager of Zenith Bank branch 1, Asaba, urged the organizers “as it has always been the norm, to ensure a healthy completion so that the true winner emerges”. He said the bank was poised to keep engaging the youths this way to give them hope of attaining their dreams through their natural talents. Noting the impressive enthusiasm of the players in the previous editions, Egede said the bank also had a good feed-back about the skills exhibited in the various centers during the competition “and that is the basis for an improvement in this edition”. He said his expectation was the discovery of talents that can be nurtured and encouraged to reach their fullest potentials of sporting excellence.

Appreciating the state government for giving the bank a wonderful opportunity for partnering with them in this regard, Egede said: “it is our commitment that as a bank, we will continually explore ways of bringing value to the state in order to further strengthen our existing relationship”. Allaying fears of the possible use of mercenaries by some schools and fielding over-aged students, the commissioner said there were other criteria to pick players within the age bracket of 16. According to Ukah, “we will make sure you have been in that school for a particular period of time. Some schools are already hiring coaches and they say if you win, we will share the money. So we are saying if you are coming as a coach, you are a volunteer. There is no fee; if you want to come and help our students, just come and help them”. He said the major goal of the government is “apart from developing their skills in sports, we want to use it to make them better people in life – engage in sports while you educate yourself”. He assured that schools sports would go back to what it used to be in his days as a secondary school student.

Determined to leave a legacy behind as commissioner, Ukah, who was immediate past commissioner for information, said “I can assure you that one of my deliverables is to crown schools sports because I was a product of schools sports and believe you me, sports is one thing that will help a student to exude patriotism, confidence, commitment, and even better integrity. The pride of a child is when he has stories to tell about his exploits while in school in things like sports, debating, quiz, drama or what have you. We are returning it in our back-to-school program. This was exactly what we emphasized; each student must belong to one of these clubs and we believe that it will give us a better school in Delta”. The commissioner who would not disclose how much Zenith Bank was putting on the table for sponsorship of the tournament said when the question was put to him that “I can assure you that we are handsomely sponsored and I can assure you that
we will not have cause to have a shoddy arrangement”. The initiator of the tournament, and chief executive officer of Hideaplus Limited, Tony Oritse Pemu said he felt satisfied and fulfilled to have initiated it. “Today, I am a very proud man. There are four other states that are copying the Delta model now. So, if we have become a model, I think it’s something everyone should be proud of”. Pemu said he looked forward to when the competition would graduate to a national Principals’ Cup and was optimistic that “we’ll get there”. Ukah also hinted that a female edition of the tournament may be introduced soon stating that “we will begin to talk to Zenith Bank because Zenith Bank is not only for men. So, we look forward to that”.