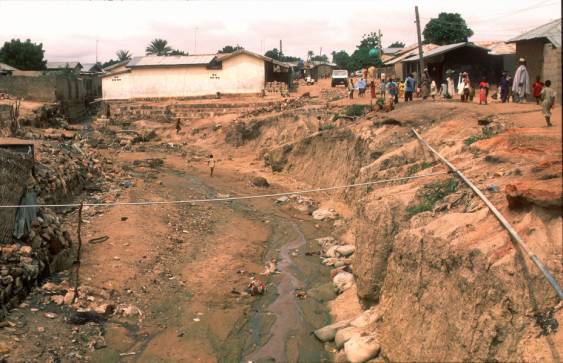 The Cross River State Government has received the approval of the Federal Government and the World Bank to award a N1.5 billion project, meant to wade off erosion challenge in some communities in the state capital, Calabar including the New Navy International Hospital and Ikot Ansa. This project is expected to bring relief to these communities especially Ikot Ansa which is a major erosion site in Calabar. Currently, there are five erosion sites in Calabar; repairs have already commenced in four of them namely Edim Otop, Atakpa, Ikot Ekpo and Nyagasang.

Commenting on the erosion issue and the new contract, the State Commissioner for Environment, Mr. Dave Orji, recalled that for the past 30 years the site has been a major threat to the Ikot Ansa community stating that in the past the state government had made several attempts to stop the damage and had done all in its power to control the damage which he described as a tip of the iceberg but they were not successful. He however assured the community that this project will be executed successfully and without delay.

A Community Leader, Chief Felix Nsemo, thanked the Nigeria Erosion and Watershed Management Project (NEWMAP) and the World Bank for coming to their aid after a long time of living in fear of losing their property to the gully created by erosion and charged members of the community to work hand in hand with the contractors. He said: â€œWe know that this will not be a failed project because this erosion site is in the heart of Calabar. The communities involved should know that this is their project, do not go and relax in your homes, you must be part and parcel of it, go and see what is happening and take records, where you do not feelÂ  satisfied the Commissioner is there to address the situationâ€.

Meanwhile, not less than N500 million worth of property has been lost in two natural disasters that have been a recurring decimal in the state. The storm, described by victims as â€œunprecedentedâ€, affected about 80 houses including schools and places of worship, with household property worth millions of naira destroyed. The destruction also extended to farms where economic trees such as bush mangoes, pears, mangoes and cocoa were pulled down. One of the victims, Obi Ojong, described the incident as â€œdemoralizingâ€, as his family has become homeless. Similarly, another victim Nenjom Osim said that her main concern was safety of her children â€œit was like a war zone with cries and shouting everywhere amidst the unabated rumbling of the stormâ€.

Assessing the disaster, the Director-General, Cross River State Emergency Management Agency (SEMA) Mr. Vincent Aquah placed the value of the damage at N300 million. He described the destruction caused by the storm as heavy on the socio-economic status of the victims and promised that concerted efforts would be made by the state Government to address their situations. He further commended the good spirited individuals who harboured the victims and urged them to sustain the tempo.

Similarly in Mabarakom community, most of the people affected by the storm are now taking refuge with neighbours, relations and friends in other communities. Though no life was lost several persons who sustained injuries are receiving treatment in different clinics and herbal homes.

For the past two years residents in these communities have lost millions of property to gullies. Some of the buildings are empty because occupants were forced to flee their homes for fear of losing their lives while those that are still living in the neighbourhood sleep with their eyes wide open for the fear of being washed down the gullies.

Expressing their anger, the communities said they had written to both the State Government and the Nigeria Erosion and Watershed Management Project (NEWMAP), which happened to be World Bank assisted agency sometime last year to come and inspect the site. â€œWe are now hoping that Cross River State New Map will come to our aid because they have started intervention in other areas and we believe that they will come to our aid but when the day will come that is what we do not know, that is why we are making a passionate appeal to them to hasten it upâ€.

When contacted, the NEWMAP State Project Coordinator, Mr. Fidelis Anukwa confirmed that the communities have written to them and they have also visited the sites. He explained that the Cross River NEWMAP cannot ascertain when work is going to commence as the process of getting funding from international bodies will take some time.