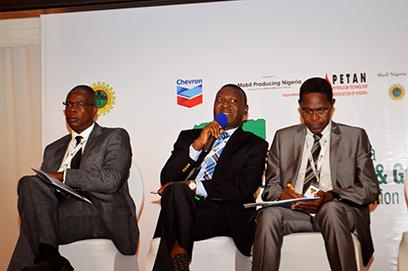 The General Manager, Policy, Government and Public Affairs (PGPA), Mr. Esimaje Brikinn has described Chevron’s community engagement model,- Global Memorandum of Understanding (GMoU)- as a demonstration of the company’s commitment to addressing the needs of communities in its areas of operation.

He said this while contributing to a panel discussion at the Sub-Sahara Africa Upstream Oil and Gas Summit and Exhibition which took place on April 05 –April 07, 2017 at the Federal Palace Hotel, Lagos. According to Mr. Brikinn who shared the company’s experiences and journey to Corporate Social Responsibility in the Niger Delta Region, before the advent of the GMoU, CNL was dealing with multiple individual communities on development issues with resultant lack of community ownership of the development process, but the GMOU model now places the communities on the driver’s seat in their own development.

“Under the GMoU, Planning, selection and execution of community development projects are now shifted to the Regional Development Committees (RDCs) who work with communities to produce community development plans that are designed to improve their livelihoods. The GMOU is a multi-stakeholder partnership initiative that provides the communities with opportunity to identify needful projects for execution by community contractors under a governance model that ensures transparency and accountability. Right now, the communities are the beneficiaries with a full ownership of the projects which is being handled by them through the planning process and execution. Some of these projects are water, electricity, schools, housing, jetties and community scholarship among others.  The GMoU has been making great progress in improving their social economic well-being and has greatly improved relationship between the company and community,” he said.

The three-day conference which had as theme; “Oil and Gas Business: Prospects and Sustainability in Sub Sahara Africa,’’ attracted stakeholders from both the industry and the academia and was according to Dr. Dapo Ayoola, Chief Executive Officer of the Summit, aimed at creating a platform for the oil and gas community in sub-Sahara Africa to meet for the purpose of sharing regional-specific experiences and proffer solutions to common challenges. “Our hope is that efforts such as ours will help to strengthen upstream oil and gas business in Sub- Saharan Africa through the sharing of ideas and best practices,” he said.