IWMI WetIn is the New App that tracks Flood in Nigeria 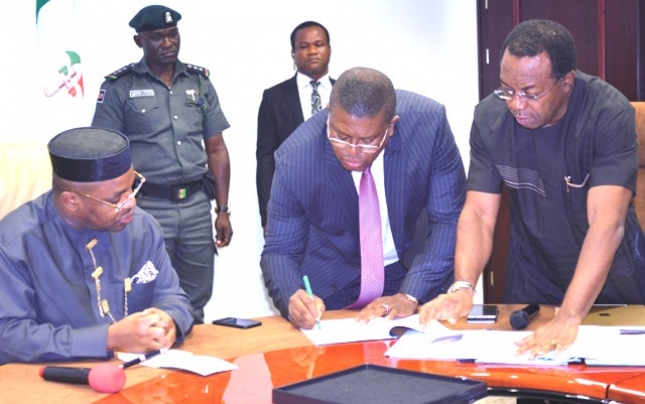 Speaking during the signing of memoranda of understanding at Governor’s Office, Uyo the State Capital, Governor Udom Emmanuel reiterated his administration’s commitment to laying a formidable economic foundation to fast-track all round development of the state.

Governor Emmanuel described the coming of Ashdene Group as a signpost of development in the state saying the company, a charitable Organisation, which is reputed to have successfully executed business in about 29 countries of the world has decided to partner the state in it agricultural, infrastructural and industrialization drive.Â  “I commend you for making Akwa Ibom the destination of your investment and your decision to collaborate with the state in the area of investment in addition to infrastructural consolidation and expansion ” He remarked.

Mr Emmanuel commended the company’s decision to set up a rice farm alongside a processing mill at Ini Local Government Area, establishment of coconut plantation and construction of roads in communities where they would carry out the investment and spoke of his administration’s disposition towards investment assuring the investors of a conducive business environment for their venture.

“I want to assure you that this is a government that is investors friendly, our policies, strategies, focus centre on investments. Be rest assured that the responsibilities of government in the agreement signed would be duly executed. ”

“We are not ignorant of the environment that you need for investment like this to grow and we are determined to create the right opportunity for your investment to thrive” He enthused.

The Country Director of Ashdene Associates Nigeria Dr Patrick Adiel said their company which is faith based, none profit organisation is in the state to explore the abundant agricultural resources to help create wealth and open up employment opportunities that would engage the people meaningfully.

He added that in seven days after the agreement has been signed, the company will swing into action for the rice project covering ten hectares of land in which about one hundred million Dollars would be invested, the Coconut Plantation and Refinery project as well as road construction which they have undertaken in partnership with the state government as part of their coperate social responsibility.

Dr Adiel who acknowledged the hospitality enjoyed from both the government and people of the state thanked the state Government for partnering the organisation in it development programmes and assured that every project earmarked for execution would be completed within forteen months.

The Commissioner for Special Duties, Engr Etido Inyang, his counterpart in the Ministry of Agriculture and Natural Resources Dr Mathew Ekaette and Chairman Committee on Foreign Direct Investment, Dr Gabriel Ukpe who signed the agreement on behalf of the state government in their separate remarks, commended the Governor for scouting for investors in various aspect of the economy saying that the state shall witness a manifestation of the industrialisation programme and that the youths will be gainfully employed even as farmers would realise better returns from their investment.

Dr Ekaette said that rice farming which has been at a subsistent level would witnessed a leap with the firm approaching cultivation with the right technological inputs and expressed optimism that the revenue profile of the state would increased as the state would soon join the league of exporters of agricultural products.

The Commissioner for Investment, Commerce and Industry, Barrister Emmanuel Enoidem in an interview after the excercise said the state has started reaping from the investment drive of the present administration andÂ  that farmers would soon smile to the bank as value has been added to their occupation.