A look into the Niger Delta Amnesty Program- Success or Failure? 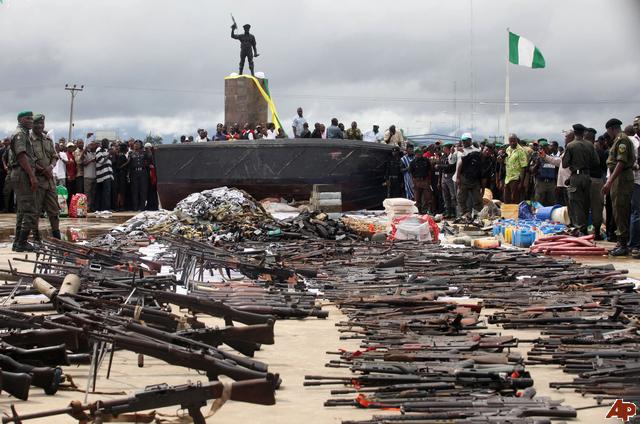 The Federal Government of Nigeria, under the leadership of the late President Umar Musa Yaradua, proclaimed unconditional amnesty for militants in the oil-rich Niger Delta and instituted the amnesty program on June 25, 2009 as a step towards resolving the protracted insecurity in the Niger Delta.

The terms of the amnesty program include the following conditions: 1) the willingness and readiness of militants to surrender their arms, 2) for militants to renounce militancy (unconditionally) and, 3) for militants to sign an undertaking to this effect. In return, the government pledged its commitment to institute programs to assist the disarmament, demobilization, rehabilitation and reintegration of repentant militants. (See:Â The Niger Delta Action Plan).

According to theÂ Special Adviser to the President on Niger Delta matters and ChairmanÂ of the Presidential Amnesty Programme (PAP), Hon. Kingsley Kuku, a total number of 30,000 people are enlisted in theÂ Amnesty Programme. Of this number, over 16,000 have been deployed to universities, as well as vocational training centers, within the countryÂ and abroad for various skills acquisition programmes and formalÂ education.

The amnesty program, like other intervention programs in Nigeria, has not been devoid of irregularities and massive corruption.Â  N127 billion was initially budgeted for the program for 2009-2011.Â  A further analysis has shown that of that amount, N3 billion was spent in 2009 as takeoff grant for the initiatives, while N30 billion and N96 billion were spent respectively in 2010 and 2011 for payments of stipends and training of the ex-militants. Another N74 billion, equivalent to the budget of some states in the country, was allocated for the programme in the 2012 budget. According to the Governor of Nigeriaâ€™s Central Bank, Sanusi Lamido, a whopping $1 billion has been spent so far on the program since 2009.

Despite the huge funds allocated for this program, oil theft and bunkering are still underway in the Niger Delta. Many jobless youths in the region have taken on the title of ex-militants and are agitating and threatening to go back to their arms if payments are not made to them.

Concerning the funding of the amnesty programme, there are varying opinions on whether the program is over funded or underfunded. From all indications, the amnesty programme is not underfunded but funds have been misappropriated leading to delays, diversions and reductions of the stipulated amounts. The programme appears to be a new largess, lucrative business for militant leaders, NGOs and politicians alike. While in camps (ex)-militants were paid N1,500 per day feeding allowance and N20,000 per month for a maximum of three months for the period of demobilization. This monthly stipend has since been increased to N65,000. Also a N15 billion contract was awarded to the Global West Vessel Specialist Limited (GWVSL), a firm widely believed to be owned by Tompolo, to supply 20 vessels for the use of the nationâ€™s military authorities to secure the waterways. These and many more indicate an outright waste of resources in the region. (Source:Â Arabian Journal of Business and Management).

The above does not suggest under funding but reckless and senseless spending which has created problems for the amnesty programme. No doubt the program has benefitted and empowered a lot of youths despite some of the challenges enumerated above, but in order for the program not to go in the way of many failed projects by the government, a lot has to be done to forestall the many irregularities in the programme.Â Â TheÂ Black Empowerment ProgrammeÂ in South Africa,Â as well as theÂ Affirmation Action Plan programmeÂ in the United States, are possible examples worthy of emulation, though they too have had their share of challenges and lessons learned. The National Assembly should investigate the huge expenditure accrued to this program and make its report public. They should do everything within their powers to bring to justice anyone or agency found misusing this huge public fund so as to serve as a warning to others.