Ojeka: Over 500,000 Nigerians are involved in artisanal mining

TOR for Evaluation of the Learning & Development Outcomes in PIND | Deadline: April 22, 2019 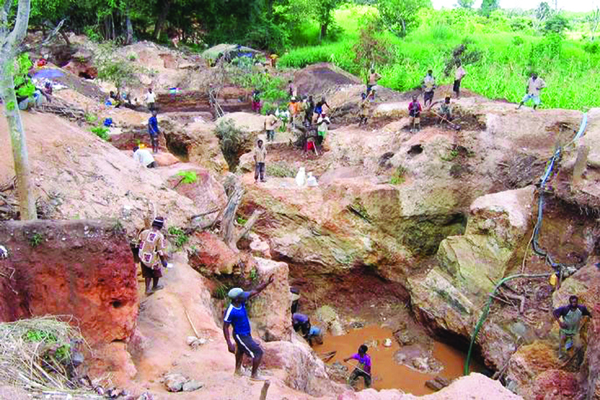 Over 500,000 Nigerians are directly involved in small- scale mining operations across the country, the Department of Artisanal and Small Scale Mining, Federal Ministry of Mines and Steel Development, has said.

Its Director, Artisanal and Small Scale Mining Director, Patrick Ojeka, who gave the figure in Calabar, Cross River State, at a five-day training for 150 registered and performing mining cooperatives and quarry associations in the Southsouth and Southeast regions, said the number was on the increase in view of Federal Government’s strategy in harnessing mining potential to address poverty in rural mining communities.

Represented by the Extension Service Team Lead of the training, Mr. Etido Umoakpan, the Director said artisanal and small scale mining activities could result in negative environmental impacts and other vices within the area of operation.

He maintained that in spite of the inherent challenges, artisanal and small scale mining was a livelihood strategy adopted primarily to alleviate poverty in rural areas in most countries.

According to Ojeka, it was in recognition of the importance of mining cooperatives that the ministry adopted a strategy termed ‘formalization’, through ‘corporatization’ to address the artisanal mining issue, while using it as an instrument to alleviate poverty.

“The miners will be trained on the introduction of health and safety procedures in the mines and provision of water and health facilities to large mining camps.

“Other areas are- assist small scale miners on mine design and planning suitable for the deposit; provide mineral testing standard and determination of mineral grades among others,’’ he said.

Cross River State Commissioner for Solid Minerals, Mr. George O’Brien-Etchi, said artisanal and small scale miners were focal to the development of the mining sector in the two regions.

The regions, like many others in the country, he said, are richly blessed with numerous mineral reserves, a virtually untapped rich geological potential capable of supporting a healthy mining sector for generations to come.

“This means job opportunities, wealth creation and a number of other advantages for us and the government that is working very hard to develop and reposition the mining sector,’’ he said.

Omosebi, who was represented by an official in the ministry, Mr. Emmanuel Bassey, said the workshop was timely in view of the priority and concern for the mining sector.

One of the participants from Cross River, Mr. Obi Okon, lauded the Federal Ministry of Mines and Steel Development for the training, noting that it would enhance their operational activities.