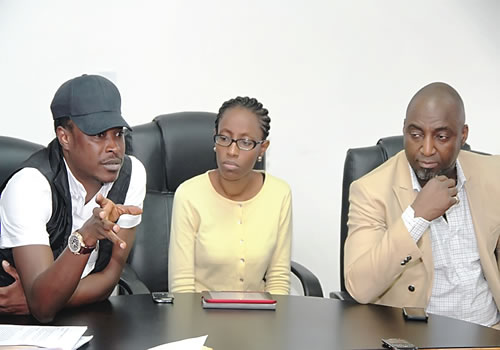 FILMMAKER Jeta Amata has been shedding more light on â€˜Dawn in the Creeksâ€™, a reality show aimed at changing the narrative in the Niger Delta from violence to peaceful engagement.

Given the breakdown in the relationship between leaders and followers in the oil rich region, there is the prevalent belief that violence is an acceptable way of solving problems and accounts for the restiveness in the area. This is what Amata, with the backing of the Niger Delta Legacy Engagement Board and funding from the US Consulate, has set out to address.

Two representatives of the Board, Adewale Ajadi and Yemi Adamolekun, joined Amata in briefing reporters about the show which started airing in July across Nigeria last week in Lagos.

Ajadi explained that â€˜Dawn in the Creeksâ€™ is targeted at young people in the Niger Delta who have, under Amataâ€™s guidance, learnt filmmaking and are now telling their own stories. He said that the ultimate goal is to help them develop their craft and become ambassadors of a new way of doing things in the Niger Delta. The first season of the show, he disclosed, features 21 people drawn from three communities and who have started making films.

Adamolekun disclosed that the Niger Delta Legacy Engagement Board is multi ethnic because the violence in the Niger Delta affects Nigeria as a whole and that it is a great opportunity to use film as a medium of change.

Amata, who reiterated that the show was created to let the people know that violence is not the only solution to the regionâ€™s problems, disclosed that the 21 participants were chosen from Nembe in Bayelsa, Ozoro in Delta and Erema in Rivers States.

He added that apart from teaching the youth filmmaking, they were also given lectures in leadership and attitude to change their mindset about the Niger Delta.

Aside this, Amata disclosed that the training also comprised empowerment as participants now own the equipment that was given to them during the training. â€œApart from the equipment, each participant was given a start up fee. They are making films they are going to make money from. We will do the best we can to promote their films; they will be screened and they will also get royalty,â€ he said.

Ajadi added that apart from the empowerment scheme Amata highlighted, some of the participants have started making their second films and that a network has agreed to show their films. â€œEssentially, we will give them skills to survive,â€ Ajadi reiterated.

Asked if the US does not have a hidden agenda with the funding from its consulate in Nigeria, Â Amata explained that: â€œThey are funding but they really donâ€™t have to. Itâ€™s our responsibility as Nigerians to keep our home. There is no control or censorship from the Americans. They have been good enough not to influence us so far and Iâ€™m happy something good is happening.â€