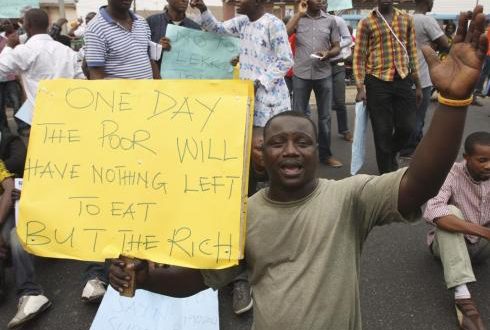 Nigeria has now taken over as the nation with the highest number of extremely poor people, a report by Brookings Institution has shown.

Before now, India used to hold the position with a population of 1.324 billion people as against Nigeria’s 200 million.

According to the report, the number of Nigerians in extreme poverty increases by six people every minute.

“According to our projections, Nigeria has already overtaken India as the country with the largest number of extreme poor in early 2018, and the Democratic Republic of the Congo could soon take over the number 2 spot,” it read.

“At the end of May 2018, our trajectories suggest that Nigeria had about 87 million people in extreme poverty, compared with India’s 73 million. What is more, extreme poverty in Nigeria is growing by six people every minute, while poverty in India continues to fall.

Development Bank of Nigeria to receive $70m from EIB, AfDB

“In fact, by the end of 2018 in Africa as a whole, there will probably be about 3.2 million more people living in extreme poverty than there is today.

“Africans account for about two-thirds of the world’s extreme-poor and that If current trends persist, Africa will account for nine-tenths by 2030.

“Fourteen out of 18 countries in the world—where the number of extreme poor is rising—are in Africa.”

In March, the International Monetary Fund had said Nigerians are getting poorer saying there is a need for coherent and comprehensive economic reforms.

Culled from The Cable