Shell Vice President for Corporate Relations in Europe and Sub-Saharan Africa, Rob Sherwin, noted that it was his first visit to the Niger Delta and having heard and read a lot about the Bodo Cleanup Project, it was pertinent to come see the level of progress made to restore the Bodo mangrove ecosystem. He confirmed that “it’s been fantastic to come to the Bodo Cleanup area… I have heard a lot of good things about this project; that this is how a cleanup should be done – so it was necessary to come and see it with my eyes. And I have seen the environment relatively free from floating oil, looking very promising… Clearly, this is an effective cleanup”. Mr. Sherwin thanked all involved in the Bodo cleanup Project for their resilience in working in such a difficult environment and encouraged the Project management team to “keep pushing forward and focus on the real impact of getting the job done in a more sustainable way rather than just ticking boxes, because Bodo is being watched by other people globally to see how cleanup should be done elsewhere… I am glad to be able to plant a mangrove seedling today to add to the restoration effort of this Project”. 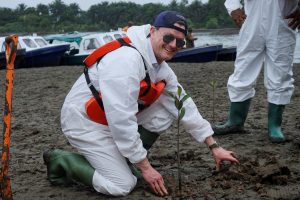 The External Relations Manager overseeing SPDC East Assets Mr. Evans Krukrubor (ETS), stated that “from what I have seen on this visit today, there’s hope for the Niger Delta, and this is certainly a template to recover the ecosystem in the region”. He went further to commend the effort put into the Project thus far for the remediation work that has been achieved. The work area (grid M19) where the Shell reps planted mangrove seedlings was code named “Hope Island”.

On his part, the BMI Co-Chairman, Inemo Samiama, who has been part of the mediation process for more than 8 years was very pleased at the progression of work having reached grid completion of over 70% of the total work area (approx. 1000ha). He confirmed that he wouldn’t have believed if anybody had told him that the project would get to this point of remarkable progress given the hitches encountered from the onset. Mr. Samiama reiterated that he was “very impressed with the level of work and particularly, the vigorous looking mangroves planted in already remediated areas”. The Co-Chair went further by thanking the “Bodo community leadership for their buy-in and support to the project because without their positive disposition, we wouldn’t even be here. SPDC too have been very cooperative and willing to continue this process”. In conclusion, he encouraged the team to keep moving the wheel, because there is more to do despite the major successes recorded.

The Bodo Remediation and Revegetation Project is setting a precedence for remedial activities in the mangroves of the Niger Delta and has attracted the presence and interest of several national and international stakeholders across various sectors. It is expected that the knowledge gained from this Project will be transferred to similar future projects in the Niger Delta.