New Nigeria Foundation (NNF) has released a new report ‘Unboxing crude oil theft in Nigeria’. It said about N15 trillion that Nigeria lost to crude oil theft between 2015 and 2018 amounted to about 17 percent of its four-year budget. According to NNF, the amount lost could have bridged 28.7 percent of Nigeria’s budget deficit during the period under review. NNF Senior Programme Manager, Chikodi Chiedo, noted that crude oil theft is a multi-billion dollar enterprise with a lot of players at various level involved. 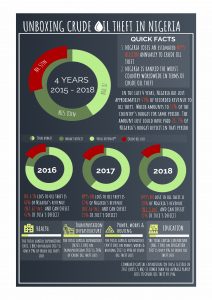 Crude oil theft occurs for several reasons, including poverty, high unemployment, and grievances about resource control, among others. The NNRC study also identified several others. They include Poor governance of oil revenue, corruption, and a lopsided revenue structure, among others. “A 2005 World Bank report estimated 80 percent of Nigeria’s oil and gas revenues accrued to one percent of its population, 99 percent of the population received the remaining 20 percent.”

It said this led to the emergence of militant groups demanding resource control and development. Kidnappings, sabotage, and illegal bunkering soon followed. Security contracts were then awarded to the militants to protect pipelines. This gave them direct access to the pipelines and the opportunity to steal all again. Efforts to curtail this new trend were met with threats of further vandalism. Stakeholders found that it was cheaper to pay security fees than to repair. 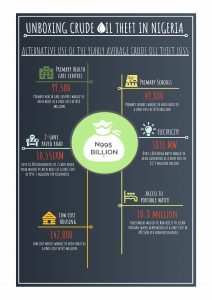 Oil companies were not left out of the blame

It added: “High youth unemployment resuming from the socioeconomic conditions in the region have led young men to become oil thieves. The average annual income of an artisanal refinery worker is N3million.

“Low-level oil thieves who steal in small jerrycans claim to only partake in the activity because they need to feed their families. They normally ‘scoop’ from leaking pines.

NNF has identified several roles for the government, civil society, and citizens in this regard.

Recommendations for civil society: Hold pipeline surveillance contractors accountable for oil theft. Advocate for transparency and open data to the public from NNPC. Inform citizens about the bad effects of crude oil theft on their communities and the environment.

Recommendations for oil companies: Improve internal content policy and ensure that most communities benefit from contracts and jobs

It also suggested that there should deployment of technology designed to swiftly detect, localize and cut off flows to specific pipelines as soon as leakages occur. NNF noted that crude oil theft is a multi-billion dollar enterprise with a lot of players at various levels and there is thus the need for collaboration among government agencies to prevent crude oil theft.

The group also lamented that inappropriate disposal of confiscated petroleum products by the Nigeria Security and Civil Defence Corps compounds the environmental impact associated with crude oil theft. It called for better training, equipping and financing of the NSCDC operations to enable them to handle such disposal.

NNF noted further that the development of modular refineries and other technologies could help in meeting local market demands, eliminating illegal processing of crude oil and the attendant environmental damage.