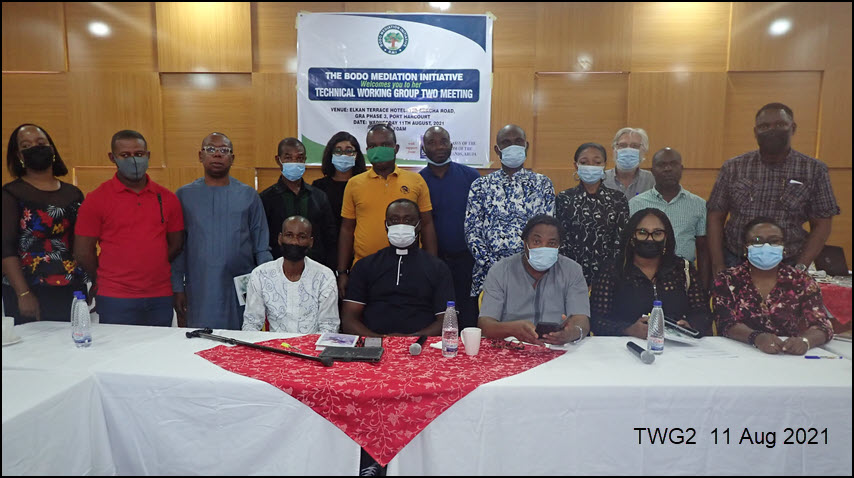 In October 2013, during the initiation of the Bodo Mediation Initiative (BMI) process, three Working Groups were established to guide the Project towards the successful remediation and restoration of an area damaged by years of oil spill incidents. Technical Working Group 1 focused on the cleanup of Bodo creeks and developing a framework under which the remedial effort could proceed to finalization, in cooperation with regulators, the Bodo Community and other key stakeholders.

TWG2 focused on pipeline integrity to prevent further spills, illegal refinery, and oil theft so that the Project can be assured of long-term sustainability. After a hiatus of several years, the TWG2 was re-activated for discussions on 11 August 2021 with two items on the agenda. The first was related to illegal activities associated with oil theft from the pipelines that cross the area of remediation and which commonly result in oil leaks from the pipeline tap, from transporting boats, and during illegal refining.  The second agenda item, though not illegal, concerned the harvesting (cutting) of mangroves in the same locations being remediated and planted with seedlings.

The third working group, TWG3, concerns the rehabilitation of alternative livelihood, community development and confidence building strategies. The schedule for a TWG3 meeting is being developed in readiness that certain legal issues will be resolved.

The convening of TWG2 at this time was particularly relevant as a recent illegal action on the Shell Petroleum Development Company of Nig. Ltd. (SPDC) pipeline in early June 2021 resulted in re-oiling of a large, previously cleaned area as well as adjacent mangrove areas actively being remediated. This was a serious setback to the cleanup effort and an afront to the substantial effort that had brought an all-time low to illegal activities in the work area.

In an introductory presentation, the BMI Project Director, Dr. Erich Gundlach, described the multiphase process involved with oil theft, processing and transport, and the obvious and long-term effects of continuing spills on the Bodo mangrove environment. The continuing nature of these spills puts the entire remediation program and planting of millions of mangrove seedlings in jeopardy.

Mangroves in Bodo area can be a long-term sustainable resource to the Community if managed properly. It is the intent of the Project to replant damaged areas devoid of mangroves. Unfortunately, while seedlings are being planted, grown mangroves are being cut and harvested in the same area. This deprives the area of a source of seeds for future mangroves and inhibits the ongoing restoration of damaged habitats. Mangroves for harvesting are better taken within stable fully grown interior areas.

Addressing the meeting participants, The Paramount Ruler of Bodo, King John Berebon acknowledged that as a community, “the responsibility to protect the environment rests on the shoulders of the leaders”. However, he noted that the protection of the oil company assets is not the responsibility of the community, but of all related stakeholders, including the Government and asset owners.

Solutions were proffered by the cross section of stakeholders at the meeting, including representatives from each of the four major cleanup contractors on the Project (Basic, Karidav, Giolee and Naada), National Oil Spill Detection and Response Agency (NOSDRA), Rivers State Ministry of Environment (RSMENV), the BMI, SPDC and the Centre for Environment, Human Rights and Development (CEHRD). It was further agreed that a subsequent meeting will be required with additional participants to further the gains so far recorded.

Mr. Inemo Samiama, the BMI Co-Chair, expressed optimism that the outcome from this top-level engagement will yield its desired result, given the resolve and commitment of the participants. He reiterated that “the BMI is committed to overseeing the successful cleanup of Bodo oil-impacted mangrove areas, which will be remarkable not only for Bodo natives but for the Niger Delta”.

In 2013 the former Dutch Ambassador to Nigeria, His Excellency, Bert Ronhaar, took a personal interest in the Bodo case and he sought to assist in bringing about the clean-up, remediation, and restoration of oil impacted sites in Bodo. His consultation with the Nigerian government, SPDC, and the Bodo community led to the establishment of the Bodo Mediation Initiative (BMI) which was set up to oversee and mediate throughout the clean-up project.